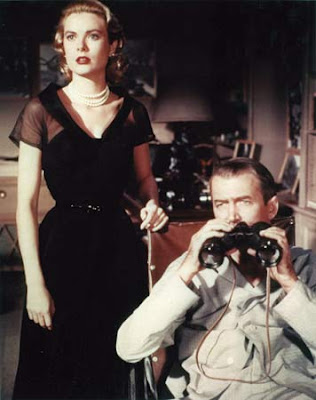 Rear Window ranks among Hitchcock’s greatest masterpieces, period. The terrific plot, along with ingenious plot elements, MacGuffins, twists et al, makes for an immensely enjoyable watch. But the movie wasn’t just that. Its character developments were exemplary, as were its various subtexts like social dynamics and voyeurism, not least of all being its commentary on the very act of making and watching movies. James Stewart gave an absolutely memorable turn as L.B. Jeffries, a freelance photographer who has been confined to a tiny apartment having broken his leg. For a man like him inactivity proves to be a tough hurdle, and so he starts whiling his time by spying on his neighbours with his binoculars and telescopic lens. Though his fiancé (played charmingly by Grace Kelly) – a beautiful upper-class girl with hardly much in common with Jeffries, and his housekeeper, find his newfound obsession disturbing and even grotesque, they too soon start getting intrigued and interested by it, more so when they realize that they might just have observed an act of cold-blooded murder. The movie is filled with great suspense, wit, humour, observations and pacing. Most interestingly, nearly the entire film was shot within a single room, thus creating a deep sense of claustrophobia and unease, and the mundane-looking apartment complex that we see through the protagonist’s ‘rear window’ was a grand set built for the sole purpose of the movie. And by the way, this was the movie that Hitchcock was said to have been most proud of.

And he rightly should have been proud. Cinema doesn't get much better than this. Great piece Shubhajit. You kind of mentioned this, but I've always appreciated the consistency of the point of view of the film from Jeffries' apartment. We don't get to leave it because he can't leave it. It's this respect for the point of view from Hitchcock that really makes this film work on so many levels. And that apartment set that was built is something I can see in my brain. I can even see the characters in my head that live in those apartments. Iconic film.

Thanks a lot Jon for the kind appreciation. Great that we concur on this, though I'm quite sure a majority of film lovers from around the globe would concur on this as well - Rear Window most certainly remains as iconic a masterpiece today as ever. And yes, the point-of-view filmmaking that Hitchcock employed was amazing to say the least. Only rarely does he provide us with information that Jeffries doesn't have, as in the shot where we get to see some activity that Jeffries misses after falling asleep. Thanks again for sharing your love for this great film.

A fabulous film and certainly one of Hitchcock's best!

Yes, absolutely. Thanks for stopping by.

Rear Window is definitely one of Hitchcock's highest points.

I find it interesting many of the great directors, Kieslowski, Lynch, FF Coppola, Hitchcock, have each tackled surveillance/voyeurism. I wonder why.

Hitchcock was most proud of Rear Window, really, did't know that. And good point about the claustrophobia. Though I did find the ending of Rear Window a bit abrupt and confusing

Yeah, I agree, voyeurism has been covered by a number of filmmakers. Of course, movies like The Conversation by Coppola or Three Colours: Red by Kieslowski were made in contexts that were rather political in nature, as was the 2000's movie Lives of Others. Not so as far as Rear Window is concerned.