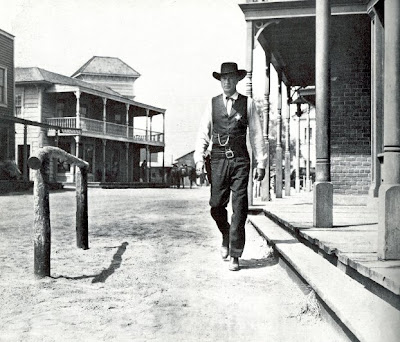 I love High Noon. Not a huge fan of the western genre but this is one of my favorite films. You might want to check out Bad Day at Black Rock which also has elements of noir which I caught on TCM Asia around 4 years back.

Well, I too wouldn't call Western my single most favourite genre, but a lot of Westerns would rank among my favourites. And this one would easily make that cut. Thanks for the movie suggestion.

"The movie was quite startling in its deconstruction of the myth of heroism, bravado, machismo and pride that had been championed by Westerns thus far."


Indeed Shubhajit!!! This is a western classic, and one of the greatest films of the 1950's in any genre. It wouldn't be unreasonable either to name this as the greatest western of all-time, or at least in the company of THE SEARCHERS, SHANE,STAGECOACH, THE MAN FROM LARAMIE, RED RIVER, WINCHESTER 73, MC CABE AND MRS. MILLER and ONCE UPON A TIME IN THE WEST among a few others. The most compelling aspect of the superbly acted, scored and filmed drama is the real-time aspect, which has been emulated by never quite equalled, not even by the noir, D.O.A.

HIGH NOON is an American classic.

As always you've sized it up perfectly here!

Yes great review of this brilliant Western, one of my top 5 Westerns easily. I love the film's editing and performances and Grace Kelly is simply beautiful in her screen debut. Of course that's Lee Van Cleef as one of the outlaws, who would later appear in The Good, The Bad and the Ugly. As the film plays out in real-time, you're right the suspense is amazing. I also love that opening track over the credits, which is Tex Ritter singing The Ballad of HIgh Noon. Gives me chills just thinking about it. I've probably seen this film about 8 or 10 times. I always get more out of it every time I watched it. Screenwriter Carl Foreman was called before the House Un-American Activities Committee and refused to name-names. He was eventually blacklisted by Hollywood. Seems there are some things in the plot that could relate to this in some ways.

Thanks a lot Sam for the appreciation.

Indeed, number of film critics and film enthusiasts have called High Noon as the best Western ever made.

But yes, even if one were not to agree to that nomenclature, there's no doubting the fact that it most certainly belongs to that elite list of movies considered among the very best representation of this much-loved genre of filmmaking.

And the fact that it so wonderfully broke the trend followed by Westerns thus far in itself made High Noon a special movie. Not to forget, the real-time filmmaking was used here with terrific effects.

Thanks man. Great to know High Noon made it to your list of top 5 Westerns. It certainly deserves to be there. Yes, I too have read the anecdote concerning the movie's screenwriter - the fact that he was banned for being a Communist sympathizer. Yet another example of the deplorable witch-hunts, given that political freedom is one of the basis for any democracy. And this was made more ironic by the fact that Gary Cooper was apparently virulently anti-communist.