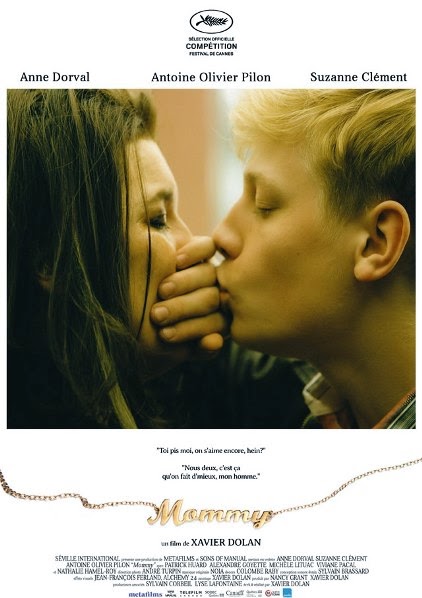 Mommy, the much-hyped 5th feature of Quebec filmmaker Xavier Dolan, was presented as an emotionally charged mother-son relationship tale, with the added subtext of the teenaged son’s volatile nature and criminal tendencies. That their relationship traversed a scandalously thin line, added darker layers to this otherwise simplistic and linear storyline. Diane (Anne Dorval), the film’s central protagonist, is a working-class lady struggling to meet ends; the messed up life of this feisty, independent-minded and ravishing lady becomes further complicated when she’s forced to be caretaker to her troubled son Steve (Antoine-Olivier Pilon), an aggressive, unpredictable lad afflicted with ADHD Syndrome and moving fast towards juvenile delinquency. Kyla (Suzanne Clément), their shy married neighbor who strikes a surprising friendship with Steve, formed the third angle in the tale. Dolan imbued closet incestuous tendencies in Steve’s relationship with his mother, but never really explored the complexities, layers and nuances surrounding it – the fact that he becomes agitated whenever the luscious Diane catches the eyes of her male neighbours was too straightforward a means to make the point. The emotional depth that the storyline called for, too, was left wanting; Kyla’s calming presence in the triangle, in particular, needed further exploration. Dorval’s powerful turn as the emotionally torn mother, and a dazzling flash-forward montage near the end that, stylistically, was in direct contrast to the drab realism in the rest of the film, formed the two striking aspects of the film. The square aspect ratio was an interesting choice in this mixed bag of a film that, in the end, became an elucidation of an interesting premise undone by ‘you get what you see’ execution.

This is the second lukewarm review I've read(the first was http://www.myfilmviews.com/2014/10/30/mommy-2014/)
For a film that received so much praise from Cannes I'm pretty confused. I'll probably see it for the soundtrack, because I like Dolan's music choices, but my expectations are certainly lower now for the story.

Just read the review you shared. I'd say my response to it wasn't as negative as that; "lukewarm", as you rightly noted, was my response to it when I was walking out of the theatre. But yes, do watch the film first before writing it off - after all, a lot of people did like it more than I did.

Most interesting Shubhajit! I respect this director greatly, but have not yet seen this one. i know this was a big critical hit at Cannes. Superbly written review here!

My reaction to it was mixed at best. I'd be interested to read your views once you've watched it.