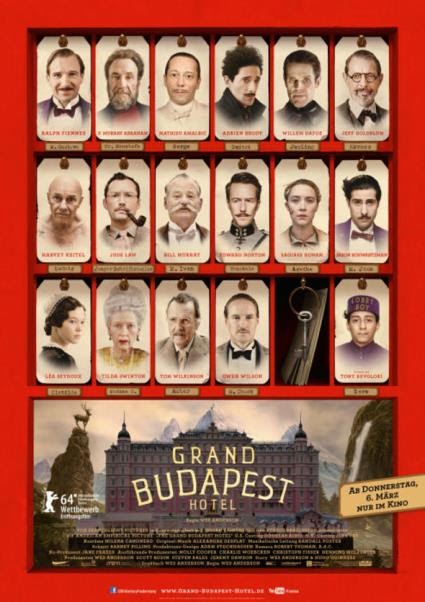 The Grand Budapest Hotel, given its setting, backdrop, timeline and formal device, can be an interesting study on how it might have shaped in the hands of an East European filmmaker – I Served the King of England, Jiri Menzel’s searing adaptation of Hrabal’s brilliant novel, and Istvan Szabo’s Bupadespt Tales and 25 Fireman Street, in particular, provide potent cases of “what if” analyses. In Wes Anderson’s hands, it was filled with his customary penchant for whimsical humour, idiosyncrasy, farce and exquisite aesthetic detailing; simultaneously, the picaresque and allegorical story was shorn off its potential for socio-political statement and satire. It begins with a writer speaking about his visits to the titular hotel and his chance acquaintance with the hotel’s aged and reclusive owner Zero Moustafa (F. Murray Abraham) from whom he learns about his unbelievable journey from being a lobby boy to its owner. The narrative then shifted to circa 1932 when Zero (Tony Revolori), an illegal immigrant to the fictitious Republic of Zubrowka, gets the menial job in the opulent and luxurious hotel, and becomes, progressively, a devoted pupil, partner-in-crime and friend of Gustave H (Ralph Fiennes), the hotel’s popular (particularly amongst the aged female guests) and larger-than-life concierge. Gustave gets embroiled in a spectacular tale of mystery and deceit, following the death of one of his patrons (Tilda Swinton), which occupied the rest of the engaging, if overly labyrinthine, story. Fiennes gave a marvelous deadpan comic turn, and was aided by the stellar ensemble cast which also comprised of Adrien Brody, Willem Defoe, Edward Norton, Mathiew Amalric, Harvey Keitel, Billy Murray, Tom Wilkinson, Jude Law et al.

Agree about Fiennes and exquisite aesthetic detailing. I didn't get Wes Anderson a few years ago. Think I'm slowly warming to his work, and just watch as I would read a comic book. Like you say, proababy isn't as deep as it could have been, still, I did notice subtext, lifted from my review:

I have read critics complain that the characters are unpleasant and lacking in redeeming virtues, but I didn't see it that way myself.While there is pending gloom, violence and greed, the film also highlights what used to be, and still is, important: Decency, meticulousness, manners, eloquence, presentability, being the best at what you do, looking after your fellow employees, and so on.
As Andy Buckle wrote in his review, Anderson is able to "find humour in the most sad and mundane events"

Thanks Chris for sharing your views on Wes Anderson's style & oeuvre. Yes, he has a penchant caricaturizing his characters and imbuing them with cartoonish flavours. I, for one, have liked his earlier films that I've seen - The Royal Tenenbaums, The Darjeeling Limited & Rushmore. As you aptly mentioned, his characters do have redeeming values and there tends to be melancholic undercurrents within the neurotic, deadpan comedies.

I loved this film which leaves a bittersweet aftertaste...not that that is always unpleasant! Anderson elides the tragic events yet shows us the aftermath, the deeply sad beauty of living life. I've already watched it twice on Blu-ray and could give it another spin tonight. So many movies...so little time.

Haha, indeed - in fact I'd extrapolate that to books to read & places to visit as well. As regards the film, it seems you liked it more than I did (though I did like it), but I agree with your remarks on its bittersweet nature.

Terrific review on one of my favorite films of 2014 and one of two Wes Anderson films I rate on the highest level - the other is MOONRISE KINGDOM. Great setting, quirky characters, some fabulous dialogue.

Thanks Sam. I too liked the film but perhaps not as much as you did. My favourite Wes Anderson films are The Royal Tenenbaums & The Darjeeling Limited. Unfortunately, I'm yet to see Moonrise Kingdom.