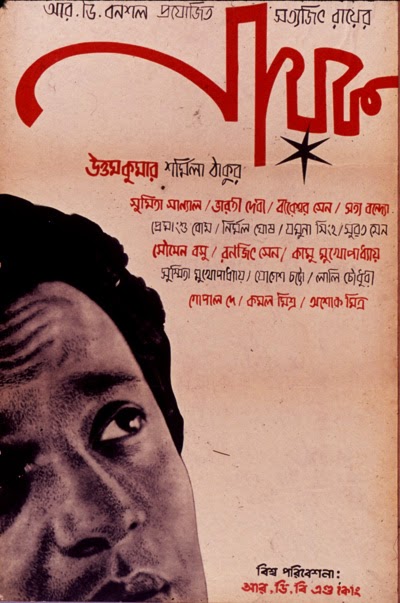 In Nayak Ray, in an inspired casting decision, worked with the reigning superstar of Bengali cinema Uttam Kumar for the 1st time, and the result befitted the stellar collaboration. This intense and gripping road movie provided a revelatory behind-the-scenes peek at a movie star with all the baggage that comes with stardom – guilt, insecurity, loneliness, false braggadocio, heart-breaks, ego, inner turmoil – but needs to remain cloaked under the fragile veneer of smug confidence. The narrative follows the journey of Arindam Mukherjee (Kumar), a superstar of the silver screen, who’s aboard a train from Calcutta to Delhi to receive a national award He plans to spend the time with himself, but his acquaintance with co-traveller Aditi (Sharmila Tagore), a beautiful and independent-minded journalist, acts as a disruptive element in his journey. Despite not being an admirer of the star or formulaic cinema, she coaxes him for an interview; their interactions gradually take him out of his cocoon and comfort zone as he introspects, re-lives the memories haunting him and reveals details from his life hitherto unknown to the public – his transition from theatre to cinema against the wishes of his mentor, his trysts with a volatile former star during and post his days of fame, his changing friendship with a Leftist friend, the constant fear of failure, certain scandal-worthy episodes, etc. Meanwhile other secondary characters added dimensions to the slice of life portrayed herein. Kumar, who knew a thing about superstardom, gave a tour de force and multi-faceted turn as the complex protagonist, while Tagore was also good as the enigmatic lady who starts empathizing with the man behind the mask, in this compelling and brilliantly cinematographed scoop.

Note: My earlier review of Nayak can be found here.

I really enjoyed this and liked the Bunuel-esque dream sequence. I finally "discovered" Ray this year and have consumed nearly everything I can get on disc. I read the great book THE INNER EYE too which helped me appreciate elements of the culture that were a bit confusing to me. My favorite is probably THE LONELY WIFE.

The final dream sequence, where the protagonist literally barges into a party filled with hostile, glum-faced people, and shot in expressionistic angles & silhouettes, seemed decidedly Fellinisque.

Good to know you have begun watching Ray, and you've read The Inner Eye too (read it as well as Marie Seton's Portrait of a Director, long time back). The Lonely Wife (Charulata) was in fact closest to Ray among all his films, and it would rank among my favourite Ray films as well.

Aye, Shubhajit, this is a fascinating, superbly acted and written road movie by the master. Your insightful and authoritative reviews further enhances the Ray literature. Great work!

Thanks Sam. This was the 3rd time I watched this film, and was left as engrossed as by the earlier 2 viewings. Uttam Kumar, who played the "Hero", was just stupendous.