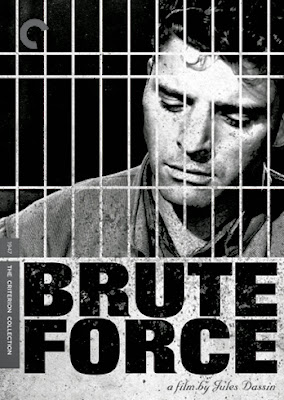 Anyone doubting Jules Dassin’s place in noir ‘hall of fame’ look no further than the rampaging march of 5 gems he made one after the other starting with Brute Force. This bleak, nihilistic and muscular prison drama combined elements of classic noir and social commentary into a dark and gripping ride, and provided an archetype for prison films that would be reused, recycled and rehashed innumerable times in the future. Set in a dank and foreboding penitentiary, its principal protagonist is Joe Collins (Burt Lancastar), who, as the film starts, is released from solitary confinement and makes his way to his cramped cell R17. The angry, cynical, imposing and curt lifer is desperate to escape from the fortress-like penitentiary in order to get back to his ailing fiancée, and hence hatches a dangerously reckless plan to that effect. Unfortunately for him, the prison is monitored with an iron fist by the coldly sadistic Capt. Munsey (Hume Cronyn) with his bunch of informers, which makes Joe’s plan nearly akin to a suicide attempt; yet he decides to go ahead despite strong requests by the cynical and alcoholic prison doctor (Art Smith). Dassin frequently alternated the gritty proceedings with romanticized, if distracting, flashbacks from some of the inmates’ lives. The moody B/W photography, with heavy usage of chiaroscuro, and the score perfectly upped the film’s nightmarish atmosphere. Lancastar, with his volatile screen presence, and fresh from his turn in Siodmak’s masterful The Killers, led the all-male cast that highlighted their camaraderie, desperation and hopelessness. The violent and explosive climax, which tossed subtlety right out of the window, perfectly captured what happens when all hell breaks loose.

You've framed this generally underrated Dassin prison noir quite exquisitely. It's not in the company of NIGHT AND THE CITY and RIFIFI among the director's work, and it's certainly not remotely with LE TROU and A MAN ESCAPED within the parameters of this sub-genre, but it yields a claustrophobic intensity. Plus, the focus in this film is far different than what it is in the others. The film’s style and chiaroscuro photography were greatly indebted to European cinema (no surprise, considering who the director is) especially, perhaps, the films of Marcel Carne. Munsey is portrayed here as a kind of American fascist in the Nazi tradition, as he plays Wagner’s TANNHAUSER while inflicting torture on his victims. But the Nazi metaphors are generally in abundance in the film.

Thanks a lot Sam. Night & the City is my favourite Dassin as well. But I'd personally place this on the same ballpark as Rififi & even The Naked City. Interesting comparisons you've drawn with Le Trou & A Man Escaped - particularly how different this was to them despite being prison & escape films. This was easily the more muscular of the 3, even if, stylistically, it belonged to a different school altogether.