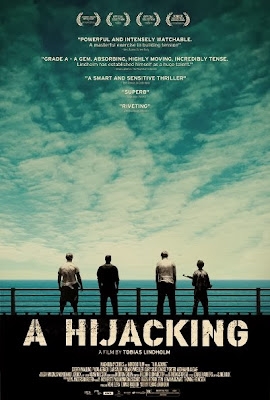 A Hijacking, shot in cinéma vérité style, was a harrowing and captivating hostage thriller centered around the hijacking of a Danish cargo-ship by Somali pirates. This and Greengrass’ Captain Phillips, released within a year of each other, had similar premises; however, while the latter focused more on the ordeal of the titular Captain and the growing relationship between him and the pirate leader, here the approach was more matter-of-fact in comparison with the focus almost exclusively on the emotionally demanding ransom negotiation process. The story’s principal actors were Mikkel (Pilou Asbæk), a good-natured cook aboard the ship whose plans of getting back to his wife soon is jeopardized to no end, and Peter (Søren Malling), the CEO of the shipping company with a steely-jawed demeanour whose ability to remain objective and focused is taken to its very limit; the smooth-taking spokesperson (Abdihakin Asgar) for the pirates who, ironically, refuses to be clubbed as one of them, played a key supporting role. Peter, against expert advice, decides to speak on behalf of the company, and, though guided by a professional, as days drift to weeks and weeks to months, his nerves, composure, psychological forte and the increasing need to expedite the otherwise painfully slow process, are tested beyond measure. Though he initially seemed an icy dollar-and-cents guy, humane layers of his persona slowly get revealed over the film’s course, and this easily was the film’s most striking feature. Consequently, and quite surprisingly, portions featuring him were easily the more memorable sections vis-à-vis those portraying the hostages.

I liked CAPTAIN PHILLIPS, and found it remarkable that two films of similar subject matter released in the same calendar year, but I do believe A HIGHJACKING is the stronger film, in large measure because of that subtlety you rightly attest to.

Technically speaking A Hijacking released in the previous calendar year, but yes, its indeed remarkable that two such similar-sounding films released so close to each other. And yes, I too would place this a notch or 2 higher than Captain Phillips, which I liked too.