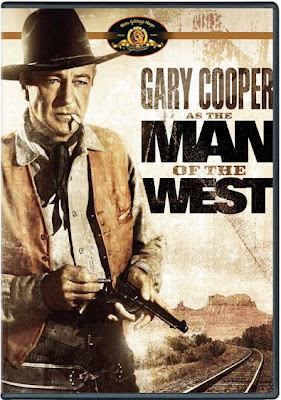 Man of the West, the last Western directed by Anthony Mann, is also considered by many as his finest work in the genre – the praise heaped upon it by Godard when it released is particularly relevant in this context. Interestingly, during its initial stages it appeared uncharacteristically light-hearted, mellow and even slightly amusing; but Mann ensured a brilliant tonal shift as the narrative progressed, thus placing this at par with his edgiest, grittiest and most disturbing earlier forays in collaboration with Jimmy Stewart. The film begins with the seemingly placid and socially inept Link Jones (Gary Cooper) boarding a train to Fort Worth, and making the company of voluptuous saloon singer Billie (Julie London). When the train is stopped by a group of dacoits and his luggage, containing all his savings, is stolen, not only the direction of their journey changes, the film too transitions into darker and more violent zones. Jones, as it turns out, is a reformed outlaw, as he is placed face to face with his former mentor, the gleefully twisted Dock Tobin (Lee J. Cobb), and his psychotic gang members. With the past that he has been trying to escape from in futility suddenly crashing down in front of him out of nowhere, Jones is placed in a deeply troubling fix that he just can’t shoot his way out of. The attempted disrobing of Billie by the lecherous gang members, a gut-wrenching bare-knuckles fight, and the ironic showdown at a ghost town, were some of the most memorable sequences in Mann’s exploration of the uncompromising realities of the frontier and the inescapability of one’s past. Cooper did a good job as the protagonist, while Cobb was excellent as the unpredictable patriarch.

I had the great fortune of seeing this film at the Anthony Mann Festival a few years back at the film Forum. It certainly is a very great western, though I would still have THE MAN FROM LARAMIE, WINCHESTER '73 and THE NAKED SPUR ahead of it as far as Mann westerns go. Cooper and Cobb are terrific for sure, and that final showdown is a classic in itself. Another great review Shubhajit!

Don't know if you saw my mini-reviews of westerns this month? I've been watching a few Anthony Mann westerns, which do you think is his best? The Naked Spur, and The Man From Lamamie are my favorites.
I really like his style, so curious about checking out this late western he did.

I just saw your mini-reviews where you've covered a host of hugely acclaimed Westerns, including Mann's works. As I mentioned above, Man from Laramie is my favourite Mann Western. I'd place Man from West at approximately similar level as Naked Spur & Winchester '73, and The Far Country below this. I haven't yet seen his Bend of the River yet.