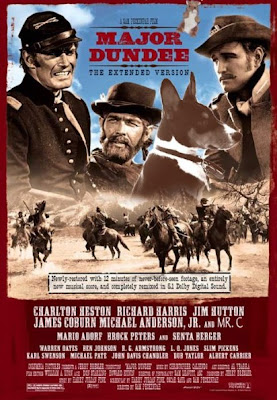 Made right after Ride the High Country, Sam Peckinpah’s much maligned and misunderstood Cavalry Western Major Dundee served as a preamble to his bona fide masterpiece, TheWild Bunch. Wacky, violent and audacious, the film chronicled the story of a seemingly foolish but ultimately successful quest by the US Army to destroy a feared Apache band. The titular Major (Charlton Heston), a simultaneously authoritarian and rebellious man, now relegated to prison command, forms a make-shift force comprising of Union guys, Confederate prisoners-of-war, and local thugs and criminals, in order to move deep into Mexico and crush the band of Apaches led by its tactically brilliant chief who have recently massacred an American colony. Among others, his army comprises of friend-turned-foe Captain Tyreen (Richard Harris). They despise each other, and things become further complicated when both men get attracted to a beautiful and voluptuous Mexican lady (Senta Berger). The situation further escalates when they antagonize the French troops in the process. Apart from the personal and political rivalries among the American soldiers, the film provided a damning portrayal of the amount of devastation that accompanies any act of aggression, and in turn the morality of that act. Heston’s towering personality made the enigmatic, glory-grabbing Dundee a darn interesting character, while the fine cinematography and terrific operatic score made this a great audio-visual experience. The fine ensemble cast also comprised of James Coburn as a one-handed native with dubious loyalties. The film’s troubled production history added darkly ironic layers to its theme and content.

"Apart from the personal and political rivalries among the American soldiers, the film provided a damning portrayal of the amount of devastation that accompanies any act of aggression, and in turn the morality of that act."

Yep, great point! The opening scene and the one after the funeral recall THE SEARCHERS, (the FORT APACHE parallels are obvious too) and the main criticism of the film by many is that the story/characters bear resemblance to Melville's MOBY DICK. It's an intricate western that will only rise in estimation over time, and you've assessed it superbly.

Thanks a lot Sam. Yes, the parallels with Melville's Moby Dick make for an crucial point for discussion, though it would be difficult to ascertain whether or not it was a conscious act on Peckinpah's part. Though the protagonists in both were obsessed by the quests, despite the inherent folly in them, their motivations were quite different - Dundee's motive wasn't as personal as Captain Ahab. Neither was Dundee as monomaniac as Ahab (interestingly, Wayne's character in The Searchers was, since you mentioned that film). But yes, as I agreed above, this does make reading of the film more interesting - particularly among students of Film Studies.