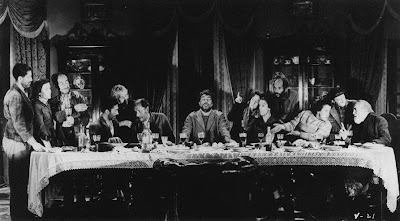 One can only be amused at what prompted Spanish dictator Francisco Franco into inviting Luis Bunuel, who had been in exile for over 2 decades in the US and Mexico, to make a film in his homeland, because ironically the movie that he made so severely displeased the conservative Franco regime and outraged the Catholic church that it was immediately banned. A powerful and vitriolic critique of organized religion, Catholicism and Christian traditions of charity, as also a deeply disconcerting peek into the essentially vile and malevolent nature of human beings – irrespective of which class they belong to, this remains one of the greatest works of the polarizing surrealist. The titular Viridiana (Silvia Pinal), a young and ethereally beautiful novitiate, is invited by her wealthy uncle Don Jamie (Fernando Rey) to his baroque mansion just before she is to take her vows. As it turns out, his suave uncle sees the image of his dead wife in her, and plans to consummate with her, one way or the other, using the help of his loyal maid (Margarita Lozano). The second half took a dramatic tonal shift when the young lady, not wanting to be a nun any more, provides shelter to the local poor and outcasts, only to almost get brutalized in the process. The grotesque side of humans was incredibly captured along with the inevitable corruption of purity. Brilliantly shot in expressionistic B/W and enacted by all, it comprised of a number of memorable moments, but the most unforgettable would easily be that of a group of degenerates gleefully impersonating The Last Supper in one of the most iconic freeze frames in the history of the medium.

Great read, I see your becoming quite the Bunuel fan, I'm a big fan of his work only seeing 5 so far, The Exterminating Angel being my favourite, L'age D'or being the most unusual (have you seen that one?)

Yeah, Bunuel continues to remain one hell of a fascinating director. Including Tristana, which I plan to review next, I've watched 8 of his works so far (7 feature plus 1 short, viz. Un Chien Andalou).

Unfortunately, I haven't watched L'Age D'or. But then, there are so many others that I need to watch as well (Diary of a Chambermaid, Phantom of Liberty, Nazarin, etc.) Suffice it to say, sooner or later I shall be watching 'em all.

The social allegory VIRIDIANA is my personal favorite by this titanic artist, though I can readily name a half dozen others I would use the M word for. Once regaled as the most blasphemous of films (rumor has it that Franco watched it in private secretly, even as it openly attacked his regime) it’s attack on the Catholic Church is legendary and every bit as pointed as the one the director launched in SIMON OF THE DESERT. This rich blend includes perversity, madness, obsession, egotism, the fallibility of human nature and the conflicting thrust of human desires. As always you masterfully convey this film's artistry and themes in a fabulous capsule assessment, Shubhajit.

Thanks a lot Sam for the appreciation & the excellent summation of the film. The rumour about Franco having watched it in private makes for a hilarious anecdote. Since you mentioned that Viridiana is your favourite Bunuel film, I'd be really interested to know which all films of his you qualify as masterpieces.

Shubhajit, I 'd list these as his absolute masterpieces:

A few others push close, but these nine in my view are his irrefutable masterpieces.

A few others do push close

Thanks Sam for the exquisite list. Among the ones you've included, I'm yet to watch L'Age D'Or, Simon of the Desert & El. Along with them, I also plan to watch Diary of a Chambermaid & Phantom of Liberty sooner rather than later.