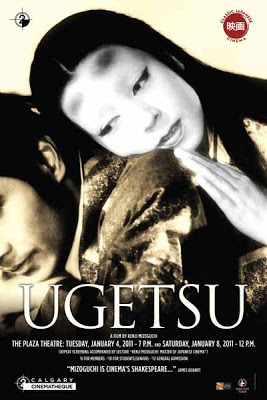 Ugetsu wasn’t just Mizoguchi’s most acclaimed work along with Sansho the Bailiff, it easily remains as one of three most internationally renowned, seen and widely discussed Japanese films ever made, alongside Kurosawa’s Rashomon and Ozu’s Tokyo Story. Based on tales set in 16th century feudal Japan, the film was a haunting, lyrical, meditative and deeply humanistic treatise on the intrinsic human traits of greed and lust, in the garb of a mystical ghost story. The film follows the tragic journeys of two men blinded by ambition and riches – Genjuro (Masayuki Mori), a potter whose business has suddenly flourished on account of the raging civil war, which eggs him to leave his wife and son in order to seek greater fortunes, and Tobei, his dim-witted brother, who dreams of becoming a samurai. Though essentially good men, their burning desires for greater glory come at great personal costs. Genjuro falls under the spell of an alluring and mysterious lady (Machiko Kyo) with wealth and aristocratic lineage, thus forcing his helpless wife to experience terrible grief and pain during the period of abandonment; Tobei too achieves success and glory, only to find that his wife is now a prostitute at the brothel he stops for rest while on his way home. Mizoguchi merged realism with surreal and supernatural elements with élan, and imbued the storyline with somber moodiness, poetic beauty, pathos and dark commentary on male ego and our inherent inability to draw the line for happiness. The atmospheric and eerily beautiful photography and camerawork (the bravura homecoming sequence was one of many indelible moments) further reinforced the film’s ethereal, dream-like quality.

Yes indeed Shubhajit! It is probably one of the Big Three Japanese films in international reverence, and it is a towering masterwork. As far as Mizoguchi goes it's second for me, narrowly behind SANSHO. Realism and surrealism has never been so seamlessly blended to achieve pure cinematic poetry. Again you have penned a stupendous capsule treatment!

Thanks a lot Sam. This is one of those rare films for which words like 'masterwork' have been coined. Be it the emotional depth or the observations on human behaviour or the seamless mix of, a you too noted, realism & surrealism, or the bravura technical aspects (particularly camerawork) - this is the kind of film that deserves to be studied over & over again by film students.