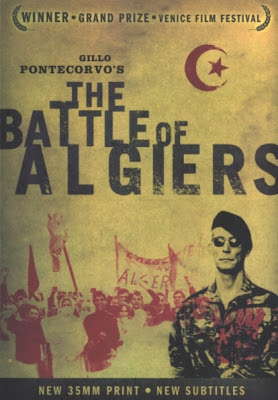 Made at the behest of the newly formed Algerian government soon after securing independence, based on the memoirs of an FLN commander, and promptly banned by France upon its release, The Battle of Algiers remains as one of the most incredible, authentic, polarizing and devastatingly brilliant portrayals of violent revolutionary struggle, and a cornerstone for political and agitprop filmmaking. Made in cinéma vérité style and imbued with a remarkable here-and-now feel, the film’s ferocious intensity and explosive anti-imperialist statement needs to be seen to be believed, and its content is as disturbingly relevant today as it was back then. The loosely structured storyline gives us an account of the formation of the National Liberation Front (FLN), its violent collision with the French forces over a period of 3 years, and the eventual iron-fisted crackdown by the army. Notably, despite its partisan stance, the film on the whole felt surprisingly neutral in spirit and tone – the mayhem and massacre caused by both the sides were shown in unflinching detail, and the French Colonel leading the charge against FLN, contrary to what one might expect, was depicted in sympathetic light and as a three-dimensional character. The grainy, high contrast black-and-white photography, on-location shooting, awkward camera angles, and jarring, hand-held camera movements, gave the film such documentary realism that it was difficult to believe that no newsreel footage was used in it. The pulsating soundtrack and the use of non-professional actors further emphasized its neo-realist aspects. In summation, this film stands as the cinematic equivalent of Che Guevara’s Guerrilla Warfare, viz. a revolutionary anthem for the oppressed class.

"The grainy, high contrast black-and-white photography, on-location shooting, awkward camera angles, and jarring, hand-held camera movements, gave the film such documentary realism that it was difficult to believe that no newsreel footage was used in it. The pulsating soundtrack and the use of non-professional actors further emphasized its neo-realist aspects.."

Yep that is it in a nutshell Shubhajit! Superbly posed! The film is a masterpiece, and is as timely today as when it was released back in the late 60's. It's a dictionary example of cinema verite. One of your greatest pieces!!!

Thanks a lot Sam. Watching this film was a mind-blowing experience - such a terrific combination of documentary realism with nail-biting narrative power of fiction filmmaking. And yes, the relevance of the film has only increased with each passing year.

I remember being in awe when I saw this for the first time thinking of its relevance to modern conflicts around the world. And like you say, its relevance has increased with each year. The documentation this film shows is essential because Algeria was the stage where the first instance of suicide bombings in public places took place. It changed the world as we know it. And yes, it is incredible that some of the final footage was filmed and not documentary footage.

Thanks Sachin. As you rightly noted, suicide bombings were a novelty then, but they've become commonplace in today's context. And, as was wryly touched upon in the film, killing people with fighter jets & napalms by developed nations have come to be recognized as a far more moral choice vis-a-vis crudely accomplished suicide attacks by so-called non-state actors. This is indeed one of those rare films whose political relevance will only increase with time.