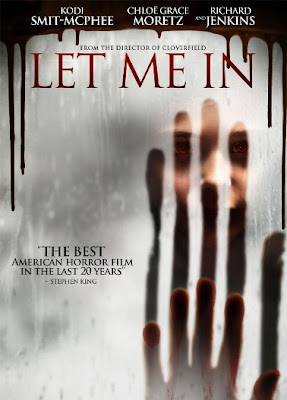 I was impressed with this film as well; while I thought the boy was merely adquate, the girl (whose name escapes me) was excellent. And it's always nice to see an American film with real atmosphere, so often that gets lost in the quick cuts, close-ups, and shallow decor which pass for style in Hollywood these days. I'm curious though, what do you mean by "less revisionist"?

Thanks man. Yeah, the girl was sure excellent, but I in my humble opinion, the guy too was great. And yeah, its one of those rare American films that has given such importance to atmosphere & mood.

I'd felt Let the Right One In was a revisionist horror film, and had even mentioned that in my review of the Swedish film, since it had completely bent the conventions of this particular genre. In that respect I felt Let Me In is less revisionist since it seemed, at more places than one, that Reeves was more attuned to genre conventions without ever fully subscribing to it.

For instance, the CGI scenes where the girl attacks the man in the tunnel, that's quintessential horror movie, and these were the facets that the Swedish original had completely avoided.

I loved the original and wanted to approach this version on its own merits. I agree that it has atmosphere and excellent cinematography, but I thought it too focused on the boy & girl. This led to a completely impossible scenario where a police officer discovers a murderer and doesn't call for backup before investigating. I know, I can suspend my disbelief for undead but not in police procedure...

I think it's worth a viewing but the original is a film I can revisit at least once a year.

The Swedish original sure is a masterpiece, and one of the finest movies of the last decade. But I found this one too really good. As for the police procedure, well, we never know what transpired as that has not been explicitly shown. Moreover, in a small town like that, and during such a harsh winter, it can also be fairly presumed that he didn't have much of a police force at his disposal.

It is also refreshing to see an American horror film that doesn't rely on a zillion flash-cuts.

On the subject of vampire movies, I finally watched George Romero's MARTIN last night and am working on a review. If you haven't seen it I recommend.

I'm always on the lookout for some really good horror films, as there are so few films worth watching & remembering that belong to that genre. So thanks Alex for referring the Romero movie, as I haven't seen it.

"It lacks the subtlety, ambiguity and poeticism of the original; this one is perhaps the more brutal, chilling and decidedly less revisionist of the two."

Absolutely Shubhajit! Yet this almost scene-by-scene re-make is way better than it really has any right to be. It's copy cat through and through, yet in it's own right it build subtle tension and atmosphere and the players are up to the task. In the end, it fails to duplicate the psychological nuances of the Swedish version. But fair enough; great capsule!

Thanks a lot Sam. Yeah, it isn't as nuanced as the original. Though same through most parts of its length, I'd still not call this a copy-cat, as for me it has a distinct character vis-a-vis Let the Right One In. But yes, at the end of the day it is a remake, and in this age of quick & silly remakes, Let Me In was like a breath of fresh air.

In fact, I'd also be extremely interested to see the American remake of The Girl with the Dragon Tattoo, a movie that I'd really liked. I've a feeling David Fincher will do a good job as its his kind of story - dark & atmospheric.