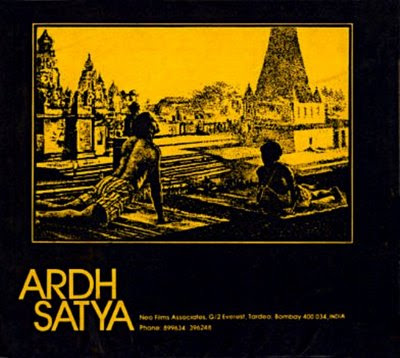 Sounds very interesting so I'll have to check it out. Your description reminds me of Bunuel and his Mexican period with gritty films like LOS OLVIDADOS, SUSANA, and EL BRUTO.

Yeah, do check it out. Well, though I haven't watched much of Bunuel, but I feel once you watch this film you'll realise that its unlikely Bunuel's films acted as inspirations for it.

One of my favourite parallel cinema films - has a lot going for it especially a political anger that is uncontainable in many ways. I think its had an enormous influence on films such as Satya and even the Mumbai noir genre as a whole. Great location shooting and performances are uniformly excellent. Nice write up. Not sure about Nihalani though - is he still making films?

Thanks Omar for stopping by. Yeah, the existentialist angst in this movie did form a reference point for a number of later films. But this, in turn, I'd say would have taken references from some of the 70's Hindi movies, cos that was the decade when "anger" became the in thing.

As for Nihalani, he continued making films till the 2000's, but hasn't made one for over 5 years now.

"Based in the mega-city of Bombay, the movie, which derived its name from a terrific poem that is recited in one of the most memorable scenes, is gritty, hard-hitting and deeply existentialist in nature."

Sounds great Shubhajit! it's a shame how many Hindi films get by the radar, leaving cineastes that much poorer. I can certainly think of several directors who come to mind, but the humanists are envisioned especially. I wonder if this is available stateside. Great capsule as always my friend!

Thanks Sam. I wouldn't call it a great film, but yes, its a pretty good one alright. And yeah, you're right, a lot of Indian films do not reach the West. In fact, of all the Indian languages, Hindi films are the ones that get maximum exposure in terms of popular releases in theatres. But they are mostly mainstream & populist movies that can easily be skipped by a cineaste. But a lot of really good films, because of lack of backing in terms of money, tend to remain confined in India, or at most, get to travel to film festivals, but rarely get mainstream releases in US or Europe.

Hello, fellow LAMB. Just wanted to let you know that The LAMMYs are coming up and we are hoping for the best voter turnout for the nominations ever. Every LAMB #1-900 is eligible to vote (and to win!), and that includes you. To participate, please go to this site: http://www.misterpoll.com/polls/521956