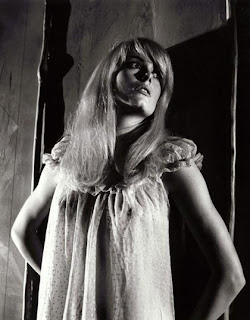 Repulsion wasn’t just Roman Polanski’s first English language feature, it was also the Polish master’s first great masterpiece. Universally hailed as a cornerstone in the genre of psychological thrillers, and often placed in the same pedestal as Hitchcock’s Psycho, the movie is about the terrifying journey made by a young Belgian manicurist, living in with her elder sister, from being a shy, introverted person to a criminally-insane psychopath. Hauntingly shot in moody black-and-whites, the movie is a brooding, disturbing and a brilliantly executed study of emotional alienation and psychological disintegration, and an eerie look at the delicate link between sexual repression and raging lunacy. The movie alternates between jazzy exteriors and claustrophobic interiors, interspersed with disconcerting surreal imagery on one hand, and shocking, albeit sparingly used, violence on the other. Catherine Deneuve (only 22 at the time!) brought to screen the frigid and emotionally distant protagonist with a seemingly pleasant demeanor, with astounding power, and her nubile, delicate beauty made the emotional impact of her portrayal that much more devastating. Though the movie might appear fatalistic, harrowing and even misanthropic to many, the story’s latent humanism wouldn’t get lost to those willing to delve deep.

Polanski’s use of the camera to reflect Carole’s ever growing insanity is brilliant conveyed. While not explicitly said, the ending with the family photograph from her childhood hints that some kind of abuse may be at the root of her breakdown. A brilliant film, one of my favorites. An excellent succinctly written review.

Thanks a lot John.

Yeah, the camera work is masterly - never too overt in imposing itself on us, yet as you mentioned it played a vital role in getting us into Carole's mind.

Great that you mentioned about that photograph. Without even telling us what might have played a part in Carol's psychosis & deep apathy towards the male folkdom, Polanski deftly hinted at what might have been the reason. At least it clearly showed she was emotionally withdrawn, alienated & deeply angry when she was a kid. Hence, over the years, the more seemingly genial her outward disposition became, the more rage got accumulated inside her.

I will be starting a Polanski movie marathon shortly and this is the one movie I'm looking forward to the most, especially after seeing 5 stars here!

Great!!! I, on my part, will be looking forward to your Polanski marathon.

Polanski seemed to have made most of his greatest films in a permanent state of exile. 'The Tenant' is a near equivalent masterpiece and provides a genuinely disturbing companion piece. One of the great films of the 60s and Deneuve has never looked more alluring.

Thanks Omar for sharing your views. I have a feeling that Tenant, unlike Repulsion, perhaps polarised its viewers a lot - you called it Polanski's near equivalent masterpiece, while some feel differently. That surely makes it an intriguing film to say the least, and consequently, a part of my 'must watch' list :)

Excellent choice of film here, Shubhajit. I chose it as my #1 film of 1965 in my countdown and basically agree with everything that you say. The entire thing is just downright eerie, particularly for anyone that has any type of fear/uneasiness about loneliness. I would say that this is my favorite Polanski film, edging out Chinatown. I also recently picked up his THE TENANT but haven't had a chance to watch it yet.

Thanks Dave. Yeah, I saw that you chose Repulsion as your best film for 1965. Comparing Chinatown and Repulsion might be being a bit unfair to both as they belong to two vastly different genres altogether and they both are brilliant works in their own rights. But if pressed, I'd say Chinatown was the first among equals. You're right, loneliness, something which is usually equated with melancholy, has been turned into a subject of terror, and with what effect!

I do agree that this is certainly one of Polanski's best films, rating with the likes of KNIFE IN THE WATER (which I believe was the director's first masterwork) and the late career THE PIANIST. This story of sexual repression and mental breakdown of course has long been compared with PSYCHO. Denuevre is superlative and the use of the camera, as John notes here is compelling.

"Hauntingly shot in moody black-and-whites, the movie is a brooding, disturbing and a brilliantly executed study of emotional alienation and psychological disintegration, and an eerie look at the delicate link between sexual repression and raging lunacy."

Sam, thanks a lot for your appreciation.

I especially liked the dichotomy in portraying mental disintegration between Psycho & Repulsion, as mentioned by a film critic (don't remember who) - while the former showed through a third person's POV, the latter placed us directly inside the mind of the concerned person.

Just saw the film. Brilliant, I must say. You mention humanism in your review. But all I could feel for the protagonist was pity.

Well, i don't know if pity would be the most appropriate word, I guess its would be something more complex than that. Hence my decision to use the all-encompassing word ' humanism' - made my job a tad easier :)

I reviewed last month after wathing the newmly remastered Criterion Blu-ray release: the cinematography is so atmospheric that older DVD editions were lost in murk and visual decay. The actual use of deep focus in tight places makes this feel physically and spiritually claustrophobic, and the fine detail in backgrounds reveals importatant narrative information.

Yeah, I agree. The atmospheric cinematography and the claustrophobic visuals played enormous roles in delving into and bringing across the astonishingly complex psyche of the protagonist. Thanks again Alex.

I saw Repulsion on a double bill with Mondo Cane when it came out. Having stepped into the theater with visions of Deneuve in The Umbrellas of Cherbourg in mind, I reemerged into the city night a trifle shaky.

Even though I haven't seen the other Catherine Deneuve movie that you've mentioned, I can nonetheless understand your reaction. Repulsion left me too shaken and stirred.