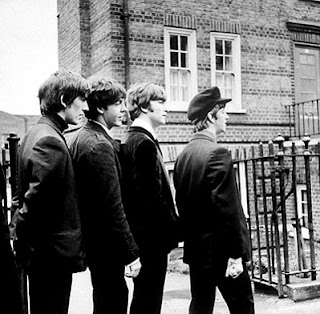 Producers of A Hard Day’s Night, in all probability, had one thing alone in mind when they conceptualized the movie – to cash in on the intense hysteria and mass frenzy surrounding the Fab Four. But, in the surprisingly jaunty hands of Richard Lester, the movie turned into a freewheeling, satirical and humorous cult classic, combining the peppy feel of early Beatles music with French Nouvelle Vague filming sensibilities. And in its circuitous, whimsical and delightfully irreverent portrayal of a fictitious day in the lives of the four iconic Liverpudlians – John Lennon, Paul McCartney, George Harrison and Richard Starkey (aka Ringo Starr), all playing themselves, the movie managed to present a definitive zeitgeist of a time that has since been immortalized with the moniker Beatlemania. Shot in dazzling black-and-whites and based on a madcap script with an abundance of self-deprecating humour, the movie is filled with idiosyncratic characters like Paul’s amusingly eccentric granddad, comical managers, and an uptight TV producer. The movie is peppered with such legendary songs like the title track “A Hard Day’s Night”, “Can’t Buy Me Love”, “She Love You (Yeah, Yeah, Yeah)”, among others. A fascinating blend of avant-garde narrative, brilliant (and at times, surreal) music videos, and cinema verite techniques, the movie, made in the form of a mockumentary, feels remarkably fresh even after nearly five decades of its release.

an intelligent and interesting blog

This was definitely a film that was planned as a quick cash cow before the bubble bust. The film was rushed into production with plans to get the completed product on the screen before The Beatles were yestereday news. No one was expecting art. They just wanted an Elvis flick, however as you state:

"in the surprisingly jaunty hands of Richard Lester, the movie turned into a freewheeling, satirical and humorous cult classic"

One of the greatest Rock and Roll films of all time and way ahead of it time.

Thanks John for sharing your views. Yeah, absolutely, this could certainly be called one of the greatest Rock & Roll movies of all time (though I guess it was far more than just that). And the subversive take on the 4 pop culture icons was amazing. No one knew the Fab Four had such ability to laugh at themselves.

I probably did but did not mean to insinuate that AHDN was only a great rock and roll movie. It is an great movie period!

One of my favorite scenes that got passed the censors of the day takes place on the train when John put a coca-cola bottle up to his nose and sniffs some "coke."
The critics of the day compared the film's humor to that of the Marx Brothers films. Quite a compliment.

Once again your masterfully economical writing has pushed all the right buttons, and I am in full agreement, especially when you say this:

"But, in the surprisingly jaunty hands of Richard Lester, the movie turned into a freewheeling, satirical and humorous cult classic, combining the peppy feel of early Beatles music with French Nouvelle Vague filming sensibilities."

But your subsequent description of the boys and the subsidiary idiosyncratic characters are perfect. This has become a classic of British cinema, and may still be the best film ever made about popular musical figures ever in any capacity. It's surely the most stylish.

@John: I completely understood that there wasn't any insinuation your appreciation. To be honest, I'd read your review of the movie, and that played a vital role in compelling me to watch the movie. So I know full well that you really appreciated the film. And now that you mention about the Coke scene, I too feel quite flabbergasted that the scene passed uncut. Perhaps the censor guys never understood the implication of the scene in the first place!

@Sam: Thanks again Sam for your appreciation. Well, my "economical writing" should perhaps be attributed more to my lethargy & time constraints than to any great skill on my part. So I guess its rather coincidental. Nonetheless I'll take the complement, especially given that its coming from you :)

Love this film! I reviewed it on my blog a month or so ago after purchasing the Canadian Blu-ray release: I hope everyone has a chance to see and hear this in high definition someday! Again, great work.

Thanks Alex. Well, to be honest, your terrific review of this movie at your blog was largely instrumental in compelling me to get hold of it and watch it.