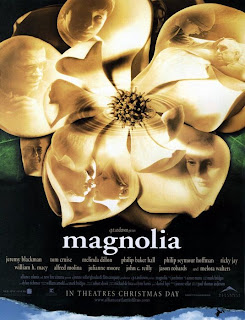 People tend to get polarized when they watch Magnolia, what with its extravagant length, grand themes, ambitious storyline and biblical overtones, but it isn’t difficult to understand when critics applaud the movie by pronouncing it as Paul Thomas Anderson’s magnum opus (at least till then). The movie focuses on the strangely prophetical and beautifully interlinked parallel stories on a single day in . Like his previous and heavily laurelled film Boogie Nights, Magnolia too was an ensemble movie if ever there was one – its brilliant array of actors, including the likes of Tom Cruise, Julianne Moore, Phillip Seymour Hoffman, William H. Macy, John C. Reilly and Phillip Baker Hall, have played singularly identifiable and emotionally complex characters on an inevitably tragic collision course. Though the length and rapidly evolving scenarios might seem intimidating, it was a largely gratifying experience for me – yeah, the deeply unsettling and utterly unexpected climax too. And the intense storytelling, with enough amounts of suspense thrown in, certainly made for an involving and a largely engrossing piece of work. The movie was also a testimony to the writer/director’s fascinating vision, skill and versatility, what with his following movie being the delirious black comedy Punch Drunk Love!

This is one that I have never been able to get into... in fact, with the exception of There Will Be Blood, I usually have this problem with PTA movies. I just felt like I was watching an inferior version of a Robert Altman film when watching Magnolia. That might be a bit harsh, but that's how I felt.

I can understand that. As I noted, this is undoubtedly one of those movies with the ability to elicit extreme reactions from its viewers. But know what, I feel that's a good thing - at least it has the ability to start debates and arguments, something not many films can really boast of.

Even though I looked at it and was impressed with it I couldn't like it. I mean I knew it was a good film but it's just not a favourite of mine.

I know what you mean. It happens often with me too, when I realise the inherent greatness of a movie, but end up not liking it as much as I would've wanted to. In fact the reverse of that is perhaps more prevalent.