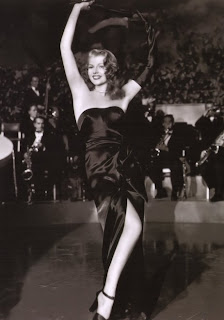 Gilda, the noir classic by Charles Vidor, starts off exceedingly well. We are immediately introduced to a drifter making easy money by gambling at shady joints in . And the movie reaches fifth gear when he hustles his way into a lucrative job as the manager of a gambling joint owned by a wealthy German guy. Soon enough enters the teasing femme fatale (played with sizzling effect by Rita Hayworth) as the newly wed wife of the owner; it is however obvious she once had a torrid affair with the drifter which didn’t end well, thus making him deeply embittered by her very presence. However, as the subject matter starts becoming heavier, with the added angle of international conspiracy thrown in, the initial chemistry starts wearing off. Only near the end does Vidor pull an ace up his sleeve with the innuendo-laden song “Put the blame on Meme”, followed by Hayworth’s famous striptease scene which might seem as an expression of her “loose morals” but in essence is indicative of the turmoil in her mind as well as her troubled life. Thus, though in my opinion the movie doesn’t rank among the best of this genre, it still does deserve a watch.

Great choice to review this classic film noir. This is a film that I love and think that it is Rita Hayworth at her finest. And although I sometimes find Glenn Ford to be a bit stiff, I think that this performance and his role in The Big Heat are my favorite of his performances. This would be a 4.5/5 for me, but I can certainly see your perspective of things losing speed a bit through the middle.

And do you ever think of this one as being similar to Hitchcock's Notorious. For whatever reason, I always group those two together in my mind, and surprisingly I prefer Gilda.

Thanks Dave. Yeah, I know there are perhaps more people who love Gilda like you do. Though I certainly didn't dislike it - I liked it allright, but I somehow felt it lost its direction somewhere in between. Menage a trois was a favourite theme among makers of film noirs, and this one started out quite brilliantly - with its cynicism and all. I felt the director would have done it for me had he continued keeping things simple instead of going for a tense, psychological drama. I guess, its just a matter of personal opinion that I didn't like it as much as I'd have wanted to.

As for Notorious, unfortunately I haven't seen it yet. Hoping to correct that sooner rather than later.

I definitely hear what you're saying, Shubhajit, and I could certainly tell from your review that you liked it. It comes across precisely as you say in your response -- your thoughts show that you really wanted to love, but it just never quite reached that level for you. Which I can completely understand, as personal taste is what makes sites like yours and mine worth checking out at all!

In fact, I think I might just revisit both Mean Streets and Gilda today after seeing you review them -- it's been a while since I've watched either of them. Plus, I need to take another look at Mean Streets for 1973 in my countdown anyway.

You're right. Personal tastes is what makes the world of cinema that much more interesting by promoting discussions and debates. Indeed a world where everyone thinks alike would be a very dull place to live in.

Yeah, do have a relook at them, especially Mean Streets. I'll be especially interested in its fate when the 70's come up for review at your blog.