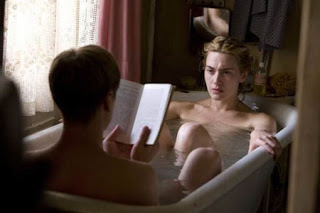 As a number of critics have so aptly pointed out, The Reader has the distinct feel of a European arthouse cinema to it – lazy narrative, low-cost look, natural lighting, unabashed nudity et al, despite being an American movie. Narrated by a German guy (Ralph Fiennes) reflecting on his past, the movie is about a naïve teenager who gets into a torrid affair with an older lady, who, as he comes to know later, is hiding an explosive secret that that is bound to have devastating implications on their lives. Covering topics ranging from sexual to psychoanalytical, this is a deeply thought provoking movie, and quite surprisingly for its slow pace, is an engaging watch. The movie boasts of a very sensitive treatment by the director, and a superb, implosive turn by Kate Winslet – one of the finest (and need I say, boldest) actresses of her generation. Even though the director didn’t delve too deep into her though-processes, thus leaving quite a few of her actions curiously unexplained, this is however a minor glitch in an otherwise highly commendable larger picture.

In that case would you be kind enough to tell me what is?

you don't generalise European Cinema as a lazy narrative. I am sure you know that you are referring to a narrative style. Lazy wouldn't be the best term for it though it is oft-used.
Cheers.

I guess you didn't read the review properly - I didn't mention European cinema per se, I wrote European arthouse cinema, and I'm sure you'd appreciate that there's a huge difference between the two.

Of course you can't generalize European cinema, or for that matter for any place. But then one also often attaches generic descriptions of movies for various countries or places - for instance when you think of Bollywood, you think of song-and-dance movies, when you think of Hong Kong, you think of action movies or Kung Fu movies, and so on. That doesn't in any way mean that only these movies are made in these places, its just, as I said, a generic description or an identifier based on the most popular genre or style for that place. Similarly, when one thinks of European arthouse cinema, one usually doesn't associate hyperkinetic narratives with it.

Shubhajit, sure.
I get you. Not hyper-kinetic but why bracket European arthouse as lazy narrative? Perhaps the difference is in the understanding of the term. Lazy might be a quality for you (Long shot, woman turning on the beach, a boy runs to her tnad they talk...) and I may see it differently.

waiting for your take on gulal...

Overall, a good watch. Altho' there were some jump-cuts/incoherence in the lines of editing, the quintessential fact remains that Hanna would rather serve life in a penitentiary that be intellectually ostracized by disclosing that she is illiterate. Maybe the ending could have been more poignantly portrayed.

Yeah, I agree. I would have liked the ending to have given a bit more insight into her mind. She remains such a closed character both to the guy and to us right till the end.

hey!! u r not from film background!! Then great! I wanted to tell you that u r actually helping me to decide which movie to download from the net!! & naturally if you are from film background u wld have led the police to me! HAHA (oOpps!!.. Not a bad idea.. wld be a good change in the jail -- !)..

But seriously this is my second comment as commented on ur 12th april post.. I THINK yr blog shld get some serious award!!! Are u sure it has not? I did not check.. too many blogs ho gaya parney ka.... BUT UR BLOG deserves not just the CUTE and SWEET award from little girl (who is cute herself!!) but from media!! like TOI say...

btw since I am watching these bengali serials nowadays in Star Jalsha.. am asking...

[I hate serials.. bcs they never end. and at the end the directors get confused!! LOL!- Hindi serials seem to be and are generally accepted in Indian Society to be something for bored and boring housewives-- thnk God that my wife hates them too!! --so it proves she is not boring or bored!!]

aahh am asking.. what? ya!After the advent of Star Jalsha.. it seems the quality of Bengali serials have improved.. for one.. it matches the set (dresses, ornaments/ makeup/ background) of hindi serials.. for 2 the stories are interesting.. ...

And I am watching this "Bou Katha Kou" the girl Mouri is sooo sweet.. and what a good actress in this role.. this story portrays (among whatever else it wants to portray which I dont care for the moment) a simple innocence in life,

I simply love it.. but what was my question??

hmm i forgot!!
ohh no.. i wanted to ask u what do you think of this serial in particuilar "Bou Katha Kou?" SO FAR i.e.. bcs bengali serials tend to die soon and just vanish without an apoplogy to the watchers TO the bloody VIEWERS!! Eg one serial called MEGH BALIKA.. or something.. about air hostesses and planes.. THAT BUGGER OR THAT PRODUCER.. AND THAT CHANNEL ZEE BANGLA! I wish to KILL THEM!! Sorry.. they never worry abt readers..never told us what happened no sorry even! just lifted the serial!!

& ahh.. since I am talking to you.. let me share.. one of my friends.. 10 yrs younger !! that time.. (ophh ahh..mathematically still is so!!) co produced a bengali movie..THE DIRECTOR was Mr Sachin Bhowmick (of the then Shatru Fame)... and I have seen a bit of filmland during that time.. very very little.. hut being an engineer like you and a Student of life..I cld learn a lot!
:-))
Good JOB!

I may not be commenting on all ur posts.. as I said.. but I will surely be reading.. whenever I get time.. :-)

Thanks for you comment(s). You guessed right, I do not have any formal education in this field. I'm an amateur cinephile - I love watching movies and penning down my thoughts on them.

As for the serial you mentioned, I haven't watched it. In fact, I'm not really into Indian serials. The last Bengali serial I watched was most probably 'Ek Akasher Neeche' - liked that serial, but haven't watched any other since then. As for English serials, I've watched a few (Friends, 24, Lost, Prison Break, Smallville, etc.).