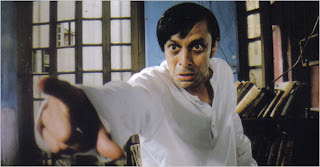 Adapted from the kaleidoscopic, unabashedly provocative and uncompromisingly brilliant novella of the same name by Nabarun Bhattacharya, noted theatre personality Suman Mukhopadhyay’s debut film has done full justice to the complex psycho-analysis and tar-black humour of the story. Herbert Sarkar, the titular character, is a 40-year old crank who thinks he can speak to the dead, and, as another reviewer aptly stated, is as much a clown as he is a charlatan. However, that’s just the short of it. Vital subplots ranging from the struggle between rationalism and mysticism, to the violent Naxalite movement of 70’s that had some of the finest students of the city embracing the intoxicating doctrines of Mao, Lenin, Che Guevara and Charu Mazundar and dying by the hundreds, make this fodder for passionate ideological discourse. Protégé of the Nouvelle Vague brand of storytelling, the director’s love for the medium and complete abandon have been expressed as much by the surreal “movie within a movie” angle, as by the exquisite pacing, the viscerally engaging narrative, terrific usage of flashbacks and dream sequences, and a fantastic eye for cinematic details that succeeded in depicting the beauty, the nostalgia, the decadence, and the shifting perspective that are all so unique to the city of Calcutta. The tragic-comic love angle and pointed satirical undertones make for viewing that is charming and disturbing in equal measures. The casting is as good as it gets. The true revelation of the movie, however, is Subhashish Mukherjee. His brilliant, explosive turn as the quixotic, irreverent, mercurial and delectably Chaplinesque protagonist is easily what one might call the performance of a lifetime.

The director sounds fascinating. Any idea of DVD availability with English subtitles?

Excellent.True, its a film which you have to sit back and relax to enjoy, and then ponder about its subtle finesse and directorial craft that you just saw through. An exquisite treatment by Suman Mukh., quite unlike the not-so-exquisite one which we had the pleasure of viewing recently!!

@seventh art - at Calcutta, in all probability, yes; elsewhere I really have no idea. But knowing the kind of movies you like, I sense you'll really like this one as well.

@Sthito - Yeah, righto. A really terrific debut, though a tad misleading where Chaturanga is concerned.

My passion is east Asian cinema, and while it seems more accessible than Indian cinema to this San Francisco boy, it's been a dense package of which I feel like I've only scratched the surface.

Where does one begin an appreciation of the vast world that is Indian cinema? Cinemascope, of course! But I don't have the resources for procurement that I do for east asian stuff here where the majority population is east asian.

Thanks for the comment. Well, despite your 'ignorance of Indian cinema', you are already aware of 4 of the most popularly spoken languages of India!

Yeah, Indian cinema is nowhere as accessible in the West as compared to those of the Far East. And even among the few that are accessible, I believe traditional song-and-dance movies of Bollywood (those made in Hindi by the Bombay film industry) make up the majority, though they in no way represent Indian cinema per se.

If you are interested in venturing into Indian cinema, I'll be more than happy to give you suggestions as to what to watch and what to avoid.

Yeah, Bollywood song and dance is what comes to mind, but I need to pay more attention to your reviews. I give them short notice because I think I'll never have the chance too see them.

A summary intro on how to approach Indian Cinema would be a great addition to your site. And if you wanted to taylor it to me ;) you could give special attention to women film makers or films with strong female characters/points of view. Another (mis)conception I have of Indian cinema is that it's an extremely male dominated entertainment industry.

Sounds Interesting..gonna get this movie tomorrow and see.Off-topic, Recently been re-watching Buddadeb dasgupta works and must say every bit of his films reminds me how much I miss landscapes in Indian cinema...maybe will write something on it.

Thanks again for giving a glimpse of this film.

@ Sitenoise - There are a number of notable woman filmmakers in India. And there are a numerous Indian movies that have strong female performances. Since I'm in a bit of hurry now, I'm not being able to provide a detailed response to your query. I'll do it in a day or two.

@Nitesh - Yeah, this one deserves watching. The experience of viewing, of course, gets heightened if one has read the novel as well. As for Budhhadeb Dasgupta, he is internationally recognized as India's greatest filmmaker among those who are still active. Watch his 'Kaalpurush' if you can get hold of it.

I don't want to give you any homework, really. I'll just start paying more attention here. You've got a bunch of reviews giving me a pretty good sense of where you're coming from because of your world-wide taste I HAVE seen a lot of what you write about for comparison.

The hard part is going to be seeing the films. Here in SF, asian discs are a dime a dozen and festivals galore.