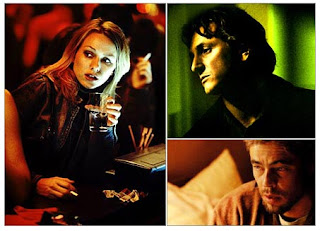 Alejandro Gonzales Inarritu’s first English feature and his sophomore effort, 21 Grams is as bleak a movie as it gets. Inarritu’s signature multiple-storyline-plot is continued in this disorienting tale of three individuals – a grief-stricken lady who has recently lost her husband, a man who has had a close shave with death, and a reformed criminal turned born again Christian – all struggling to make a life out of their existences bereft of joy, hope or solace, and striving in futility for redemption. The emotionally draining (and I daresay, extremely demanding) completely fragmented, non-linear narrative imparts an immense sense of grief encompassing the troubled souls, yet it also allows the viewers to be passive, impartial observers without getting sucked into their glum, claustrophobic and forever spiraling lives. Naomi Watts has given a truly unforgettable and emotionally charged performance (reminiscent of her superlative career-making turn in Mullholand Drive); Sean Penn and Benicio Del Toro, too, have given memorable renditions in this extremely well-enacted film. Though the movie lacks the explosive punch or kick-in-the-gut of Amores Perros, 21 Grams nonetheless manages quite an emotional impact. The title refers to an experiment which allegedly determined that the weight of a person's soul is 21 grams.

I liked this a bit more than Amores Perros, maybe, or simply, because it's English and I was able to catch more nuance. Naomi Watts ... Wow, what a performance! And how delightful to have Charlotte Gainsbourg too.

" ... it also allows the viewers to be passive, impartial observers without getting sucked in...."

Great observation, nicely put. I think you have summed up the magic that is Inarritu. For some reason it makes me think of Gasper Noe's "Irreversible" in the way it was possible to enjoy that dizzying simultaneous kick in the gut and face while ripping your heart film.

Thanks a lot for the appreciation.

Though for me Amores Perros was THE movie, I really liked 21 Grams as well. Rarely have I seen a movie that is as disorienting or depressing. Though a lot of people didn't like the non-linear narrative, it worked for me.

And yeah, Naomi Watts once again showed why she is perhaps one of the greatest actresses, and not just of her generation.