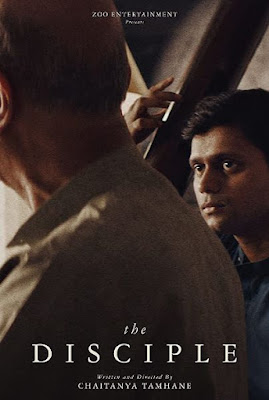 Chaitanya Tamhane’s The Disciple – the first Indian film since Mira Nair’s brilliant Monsoon Wedding to feature in the main competition at Venice – was an immersive delve into the austere, rigorous and cloistered world of Hindustani classical music… the years of training, discipline and self-sacrifice that it necessitates aside, a world defined by the tradition of passing down of skills from guru to protégé, and avowed reverence in return. The film’s titular disciple is Sharad (Aditya Modak), who’s thoroughly committed to attaining mastery in this field, even if that means life-long self-denial. Unfortunately, despite his monomaniac pursuit and extreme desire to achieve transcendental abilities, he may never be able to make the leap to greatness; and hence, his growing internal conflicts with seeping disillusionment, existential despair and puritanism become as onerous as the pursuit itself. In this journey over a number of years, from youth to approaching middle-age, three people represent his moral compass – Guruji (Arun Dravid), a barely recognized stalwart and his equanimous teacher, who represents the benchmark that he strives for; his father who too lacked the gift despite his enormous passion in this field; and Maai, an esoteric, forgotten maestro whose views about denouncing recognition and embracing extreme self-flagellation – captured through eerily captivating voice-overs – accompany terrific slo-mo long-take shots of Sharad riding on his bike through the Bombay streets. Modak and Dravid, interestingly, are both classically trained vocalists, and both brought startling authenticity to their roles; Modak was especially brilliant in capturing the seemingly unflappable protagonist’s obsessive quest that completely consumes his identity and being along the way. The film’s brooding tranquility and layered use of music – a prerequisite given the subject matter – were absorbing too.