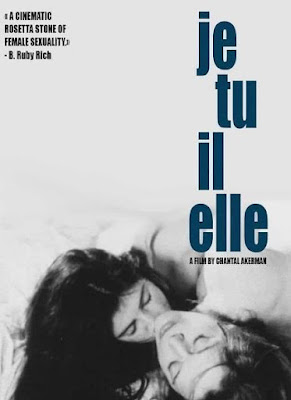 Existential ennui, detachment, disaffection and alienation were the dominant themes in Je Tu Il Elle – Chantal Akerman had made a few shorts and a couple of feature-length films prior to this, but this arguably was her breakthrough work – and they were captured with the kind of stark, low-key, understated ambiguity, formal rigour and boldly experimental touch that would define her oeuvre. That she was just 23-year old then – freshly back from New York where she experienced a diverse set of avant garde filmmakers – made this quietly defiant exploration of feminist subjectivity, neurosis and sexuality that much more startling. The film – shot in inky, grainy B/W – is structured into three acts through which the four components of its title are presented. In the first act we see Julie (played with formidable courage by Akerman herself) – the title’s “Je” – confining herself in a small apartment for a few days where she arranges the furniture, attempts to write a rambling letter to someone – potentially the title’s “Tu” – obsessively gorges on sugar, and even sheds her inhibitions by disrobing herself. In the middle act, she moves out of the place and takes a ride with a long-distance trucker (Niels Arestrup) – the title’s “Il” – who opens up about his family and infidelity upon being provided a quick, impassive gratification by her. And, in the film’s final act where the proceedings once again shift to indoors, she has an unplanned night halt at the place of a young woman – the title’s “Elle” – who, as it becomes gradually evident, is a former lover; and, in the daring, extended and strikingly de-sexualized climax, they engage in passionate love-making before Julie must again silently move on to somewhere else.