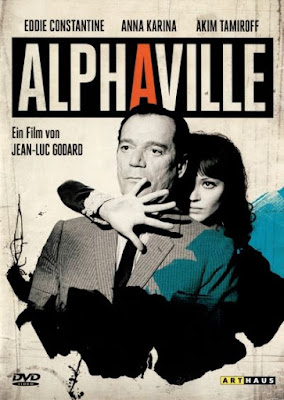 Nearly every powerful and prescient dystopian work – both literary and cinematic – evoke past and present sociopolitical manifestations, even while ostensibly depicting the future. And Godard, the radical prankster that he always was, went a step further by situating Alphaville in then present-day Paris devoid of any futuristic SFX while portraying a totalitarian future where aspects not associated with cold logic – love, grief, memory, poetry – haven’t just been outlawed, they’ve also been expunged from the lexicons. And, while primarily a sci-fi, it was also a fascinating B-noir pastiche – unsurprising, considering the Nouvelle Vague auteurs’ love for classic American noirs – what with its hard-boiled gumshoe in trench-coat and fedora. It was, therefore, a work of dazzling formal swagger and panache where impish humour, pop-cultural references and genre subversion vied for space with deeper philosophic inquiries and antifascist commentary. Lemmy Caution (Eddie Constantine; he’d played this character in multiple European films) is a weary secret agent who’s made an inter-galactic journey to the titular technocratic dictatorship – in the garb of a reporter – in order to destroy a tyrannical supercomputer called Alpha 60 that controls every aspect of life and society here. During the course of this dangerous mission he develops a soft spot for the beautiful and enigmatic daughter (Anna Karina) of the state’s mastermind. The mesmerizing B/W photography imbued Paris with a dehumanizing atmosphere by focusing on its modernist side – Tati, too, would do that in his masterpiece Playtime – while the bravura single-take sequence that the movie begun with almost belied its otherwise improvisational nature. Ironically, Alpha 60’s guttural voice – which reminded me of Godard’s own throaty voice-over in The Image Book – was actually provided by a man with an elotrolarynx.