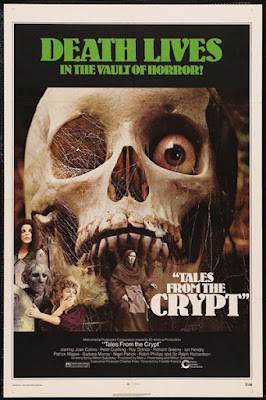 During its short lived history Amicus Productions became the only serious rival to Hammer Films in the domain of British horror B-films, and Tales from the Crypt, based on stories from the cult EC Comics, remains the most well-known among the seven portmanteau horror films that it produced, thanks in no small measures to the popular 7-season HBO TV series. Connected by a framing story about a group of 5 tourists stuck in an underground catacomb and made to face their futures by a robed man (Ralph Richardson), it comprised of 5 shorts that were deliciously misanthropic in their portrayal of the grotesque side of human nature and in their espousal of the tenet that human society is basically rotten to the core. In the gleefully bloody …And Through the House, a scheming lady (Joan Collins), after murdering her doting husband, finds herself running from a homicidal lunatic on the loose; in Reflections on Death, a businessman (Ian Hendry) coolly abandons his wife, only to be left disfigured by an accident while eloping with his mistress; in the deeply melancholic Poetic Justice, a wealthy snob (Robin Phillips) decides to get rid of his neighbor, an aged garbage man (Peter Cushing), but faces a horrible comeuppance in return; in Wish You Were Here, a rendition of the renowned W.W. Jacobs short story The Monkey’s Paw, a business man (Richard Greene) close to bankruptcy faces a horrendous future thanks to an ancient statuette; and in Blind Alleys, the residents of a home for the blinds exact a clinical revenge on their callous director (Nigel Patrick). Despite the weak framing device and a forgettable climax, the demented episodes made this a rather enjoyable ride.

Thank you for the education. I didn't realize there was a 1972 film. I'm familiar with the comic, the HBO series, and the later movies, but not the one from 1972. I really enjoyed 'Tales from the Darkside' as well. I adored the film and the series. I also loved this short-lived series called 'Monsters.'

My pleasure. This was, in fact, a comparatively more popular outfit by an otherwise cult production house. The HBO series, of course, became far more popular - heard good things about it & hope to catch it at some point (I've watched a few episodes here & there, but not the entire thing).

I have seen this particular film dozens of times in my life - it is a huge favorite from my childhood, and I recently acquired the blu-ray! The best of these episodes -through they are all quite good - (as is the bookends with Ralph Richardson as the crypt keeper) are REFLECTIONS ON DEATH and BLIND ALLEYS, both which bring their evil perpetrators a well-deserved grisly fate. Peter Cushing is wonderful as the child and animal lover who is destroyed by the heartless (literally and figuratively!) neighbor. I do also like the Joan Collins episode that opens the film, and the one based on "The Monkey's Paw" especially for that indescribably horrifying end, which poses a fate far worse than death!

Love the film and much appreciate your expert treatment her Shubhajit!

i strongly recommend the other exceptional Amicus omnibus, VAULT OF HORROR!

Thanks a lot Sam for the terrific response. I'll surely make it a point to watch Vault of Horror, which, I believe, is often packaged as a companion piece to this film. And yes, the segment starring Peter Cushing was indeed the best of the lot - it was not just a horror segment, but one with a strong social commentary & human drama.