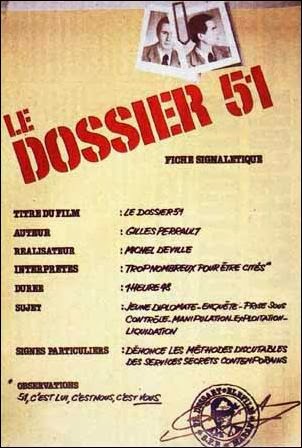 Le Dossier 51, Michel Deville’s adaptation of Gilles Perrault’s novel, would strongly remind one of such classic films on surveillance as The Conversation and The Lives of Others, as well as the paranoid conspiracy thrillers popular during the Watergate-era. But, unlike all these films, Deville employed a novel formal device by placing the viewers into the shoes of those carrying out the intrusive surveillance. The result of the point-of-view narration and shoot, therefore, was disconcerting both psychologically and from an audio-visual perspective. A French man has just been elevated to the level of a Diplomat, and for reasons not elaborated an unidentified intelligence agency decides to prepare detailed dossiers on his life, background and activities – the kind of illegal snooping CIA is notorious for. The motive, therefore, was secondary vis-à-vis the actual act. They name the man ‘51’, use every available mode of information gathering, including photographing his and his beautiful wife's moves using telescopic cameras, wire-trapping, accessing confidential information, bugging his apartment, tailing, undercover agent conducting fake interviews with people from his past and present (including a particularly disturbing one with his emotionally scarred mother) and even arranging seduction of his former girlfriend, and starts documenting, with chilling efficiency every single facet of his life, spilling out worms out of his closet in the process. And if that weren’t enough, they even psychoanalyze him based on the information gathered and finalize ways of blackmailing him if necessary. The film, using its faux-documentary style, provided terrifying commentary on state-organized breach of privacy, thus giving relevance and credence to paranoia among common people.

I've never heard of this film, but it sounds like it's rather appropriate to watch in modern times.

Shubhajit, have you read Ty E`s astonishing reveiws of "The Wolf of Wall Street" and "12 Years a Slave" over on Soiled Sinema ?, hes the ONLY film reveiwer in the entire world whos had the guts to tell the truth, the whole truth, and nothing but the truth about those two movies ! ! !.

"msmariah" is a gorgeous bird.

@Ms Mariah: Thanks a lot. Looking forward to hearing from you more in the future. Yes, this remains a highly relevant film even in today's context.

@Jervaise: I haven't read the reviews you've referred to, but I'll surely have a look at them. I'm yet to watch 12 Years A Slave though.

I'd rated Barry Lyndon as "Essential Viewing", which shows that I consider it in high regard. But, that said, in my opinion, its not the best film of Kubrick (that would be a toss-up between Dr Strangelove & 2001: A Space Odyssey), or the best film of the year of its release, i.e. 1975 (Angelopoulos' The Travelling Players is the one for me, followed by Altman's Nashville). Hence, though I consider it a great film, it didn't manage to manage to make it to my Top 100.

Shubhajit, with all due respect, the only bit i recall from "Nasville" is where that gorgeous bird does the reluctant striptease, that babe was so amazing.

Would you believe I have never seen this film Shubhajit? And the comparison to the likes of THE CONVERSATION and THE LIVES OF OTHERS make it essential. Fascinating review!

Thanks Sam. I'd be really interested to read your views once you've watched this underrated & under-watched film.