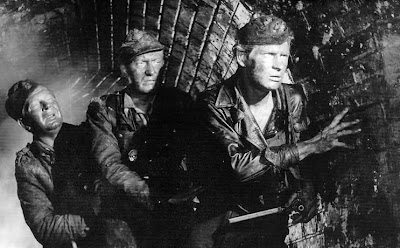 Ashes and Diamonds easily remains the most famous work in Andrzej Wajda’s ‘War Trilogy’, but the second installment in the trilogy, Kanal was possibly the best of the lot, which also comprised of A Generation. It provided a relentlessly grim, crushingly harrowing and incessantly bleak portrayal of the last days of the 1944 Warsaw Uprising where the Polish Resistance, despite their bravery and fortitude, suffered a trouncing defeat at the hands of their Nazi occupiers. It was also an intensely claustrophobic viewing experience – both physically and psychologically – on account being set, for more than two-third of its length, inside the dank, grimy and labyrinthine underground sewer system. The last few surviving members of the Resistance, led by Lt. Zadra (Wienczyslaw Glinski), after the latest assault by the Germans, must take to the sewers in order to escape. Courageous soldier (Tadeusz Janckar), and his blonde bombshell lover Daisy (Teresa Izewska), who, ironically, happens to be the only person who knows the way through the filth, are among those who are part of the group. However, their best laid plans go haywire once they go down – the complex catacomb-like network, and the lack of light, clean air and food, coupled with the poisonous gases regularly tossed through the manholes to flush out the rebels, leave the beaten men and women enmeshed by spatial disorientation and fast sinking into utter hopelessness, thus taking them to the very edge of embitterment, tolerance and sanity, with tragedy and death lurking around every possible corner. The film, therefore, was not about courage or heroism, but about debilitating defeat from every perspective imaginable, thus making this incredibly desolate and nerve-racking.

"The film, therefore, was not about courage or heroism, but about debilitating defeat from every perspective imaginable, thus making this incredibly desolate and nerve-racking."

Yes indeed, precisely Shubhajit! I'd say it's a close call between ASHES and this one as the masterwork, but either way is fine. It's as grim and harrowing as any Wajda has directed. Great work here!

Thanks Sam. Ashes certainly remains his most widely reckoned work - the one film that he's most associated with. Personally I liked this grim masterwork more, though.