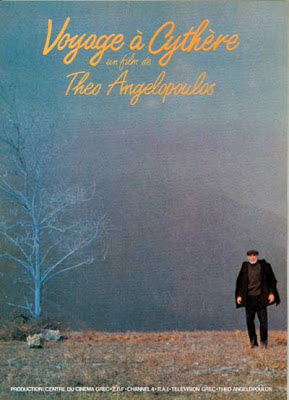 The failed Communist revolution in Greece after WWII has been a recurrent theme in a number of Theo Angelopoulos’ films – particularly, The Traveling Players and The Hunters. However, whereas in the said films past had been chronicled as "present", here it was portrayed through suppressed but perennially haunting memories, and the aftermaths on subsequent generations – at national, social and personal levels. Voyage to Cythera, the first film in his ‘Trilogy of Silence’, is about a former rebel, and now a weary old man, who arrives to his country after spending many years in exile in Russia, only to find himself in a place far removed from what he had been expecting. His son, now a prominent filmmaker, has been haunted by the memories of his lost father, while his wife and his daughter have learnt to cope with his absence. Reconciliation with his family, however, turns out to be far easier than being accepted by the society. His sudden arrival to the village where he used to reside creates commotion among all – more so when he refuses to part with his land. Things reach a near absurdist level when the Greek administration tries to get rid of him, while Russia refuses to take him back; consequently, he ends up stranded on a small raft with his wife by his side, leading to a highly poignant finale. The country’s complete refusal to accept any memories related to its turbulent past, therefore, took not just figurative but also literal shape in this beautifully paced, liltingly scored, quietly meditative and deeply melancholic film. Trenchant political commentary and the tragic human story were delicately and memorably balanced here by Theo.

Magnificent essay Shubhajit, though I haven't seen this particular Angelopoulos film. TRAVELLING PLAYERS is certainly a masterpiece, and the director is a major player on the world cinema stage. Sad that he was cut down before his time due to a traffic accident. This sounds like a fascinating subject, and I'd like to get to this sooner than later.

Thanks Sam. I hadn't watched any of Theo's films for a long time, and now suddenly find myself an ardent admirer of his. Planning to cover more of his movies in the recent future - including the highly acclaimed Landscape in the Mist & Ulysses' Gaze. In comparison, this isn't as internationally renowned - but a very fine film nonetheless.