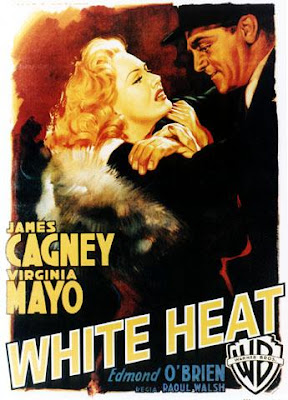 There are movies that you remember for excellent direction, and there are movie you remember for superb acting; Raoul Walsh’s White Heat is that rare film that serves both. This violent and frenetically paced gangster film, with a couple of memorable heist sequences thrown in, is as entertaining as it gets. At the centre of the film lies the powerhouse, no-holes-barred performance of James Cagney. His portrayal of Cody Jarrett, a psychotic, pugnacious, vicious, epileptic and mother-obsessed thug with ice in his veins, is a pleasure to watch for the kind of gleeful and snarling menace that he brought into the role, and is often considered the screen legend’s last great performance. At the other end of the spectrum lies an undercover agent who manages to infiltrate into Cody’s gang by gaining his trust. And thus ensues an unpredictable, cat-and-mouse tale culminating with the classic “Top of the World” finale. The film boasts of a horde of memorable, nail-biting scenes, including the one where Cody goes berserk upon hearing of his mother’s death. Walsh keeps the viewers’ collars grabbed right from the train-robbery that kick-starts the film, till the climax where Cody goes down in a blaze of glory. And, in keeping with the tradition of classic noirs, the film also has an adulteress in the form of Cody’s self-serving trophy wife.

Yes indeed Shubhajit, this is as entertaining a film as American cinema has ever produced, and Cagney is at the height of his powers. The mother addiction is the film's most fascinating component, and black humor abounds. Early in the film, Cody shoots holes in the trunk to give a prisoner some "air" while the famed prisoner cafeteria scene, when Cody hears about the death of mom is a rightly celebrated set piece. Margaret Wycherly turns in a great performances as Cody's mom.

Thanks a lot Sam for the good words. Given that you've seen far more than I have, so coming from you, the statement that "this is as entertaining a film as American cinema has ever produced" sure holds a lot of weight!!! Yeah, shooting holes in the trunk to give the prisoner some "air" was truly humour at its most caustic. Thanks again Sam, its always a pleasure to hear from you.