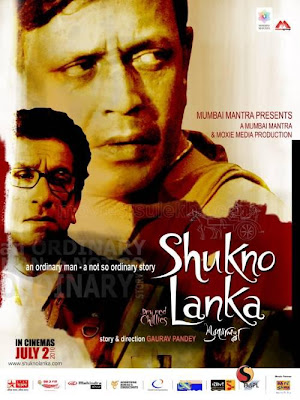 Shukno Lanka is about the kind of protagonist rarely dealt with in cinema – that of a junior artiste. And, with Mithun Charkraborty, one of the biggest stars of Bengali cinema, playing the lead, the movie couldn’t have been more ironic. The film is about a humble and struggling middle-aged actor of bit roles who gets the chance of his lifetime when he gets cast as the principal protagonist by a renowned arthouse filmmaker in his latest work. Even more ironically, the film happens to be based on a short story by Ritwik Ghatak called Parash Pathar (The Philosopher’s Stone) – which was also the title of an amazing satire by Satyajit Ray and which had in the lead Tulsi Chakraborty, a brilliant but often neglected character actor, in the role of a lifetime! The film has its share of unevenness, and could have been a bit more subtle. Thus, at the end of the day, it isn’t as much the director’s movie as it is the actors’. Sabyasachi Chakraborty, as the Satyajit Ray-esque auteur, is commanding as always, and so are a couple of others. But the movie fairly and squarely belongs to Mithun, in what might rank as one of the most devastatingly breathtaking performances in this thespian’s illustrious career. His portrayal of Chinu Nandy, a simple-natured man, who has repeatedly been beaten down by fate, yet hasn’t lost his humanism, is truly astounding, lending the movie a transcendental quality in the process. When one of the characters in the film mentions that his face is a landscape of emotions, I couldn’t help but smile in acknowledgement.

Well Shubhajit, I haven't seen this one, but was interested in learning here that it was based on a story by Ritwik Ghatak, who directed one of my favorite Indian films ever, THE CLOUD-CROSSED STAR. I understand you are mainly in prise here of the actors. Typically insightful capsule here.

I meant to say THE CLOUD-CAPPED STAR. Sorry about that.

Yeah, apart from being a great filmmaker, Ritwik Ghatak was a writer too. Consequently, the movie forms a link between Ritwik Ghatak & Satyajit Ray - so that's a unique feature of the film. Thanks a lot Sam for stopping by.

Heard on beautiful Debasree Roy in his small role, but it is great. Another national award winning performance by Mithun Chakraborty.

Yeah, I too strongly feel that Mithun's stellar performance deserves to be rewarded with the national award.