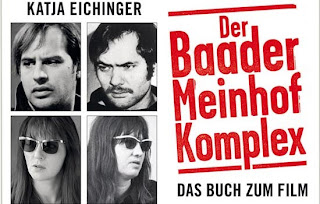 70’s were a decade marked by protests and political unrest throughout the world. But very few cities witnessed the kind of spontaneous and violent uprisings that happened on the streets of and . Like the Naxalite movement in Calcutta, the one in Berlin, too, had the intoxicating Leftist doctrines of Mao and Che Guevara as its basis, started principally as a student movement against ‘American Imperialism’, rapidly took the form of urban guerrilla warfare, and was met with an iron fist (with police action, at times, being hard to distinguish from those of the 'terrorists'). Der Baader Meinhof Komplex, based on the spectacular rise and fall of the notorious Red Army Faction (RAF), is a detailed and energetic chronicling of this dark time in German history. Though the runtime could have been reduced, especially in the last third of the movie, it hardly matters much thanks to the kinetic screenplay, thumping soundtrack, and for being a colourful and engrossing representation of the zeitgeist of the turbulent times. The volatile Moritz Bleibtreu and the beautiful Martina Gedeck, two of German cinema’s most recognized faces, have given terrific performances as two of the key players of the radical group. The director’s assured depiction of the array of events, without ever taking sides, has made for engaging viewing and a fine historical account, at the same time. And the moral ambiguity in its fatalistic ending has ensured a long after life for the movie.

My biggest problem with the film was its unimaginative-ness. I felt it neither turns out to be a unbiased documentary, nor does it take in the (much required in such films) fictional elements...

Also that Mr. Udel tries too smart to slip in his "sale points" on the pretext of handling history and uncovering truth.

Just noticed that you had tagged it "Epic"... Any reasons?

I don't agree on the 'unimaginative' precinct. The storytelling was, in my opinion, very good - it managed to keep me hooked and involved despite its length. The transitions of the characters was also well accomplished - Baader's from volatile to quiet resignation, Meinhof's leftist inclinations to full-fledged involvement. The movie even managed to address both pop-culture and political aspects.

As for tagging it as an "epic", it was chiefly because of its epic scope - the movie covered the entire spectrum of RAF's existence, right from its inception to its demise; it also showed this 'epic' tale through the eyes of both the 'terrorists' as well as those of the 'state'.

Thanks a lot for the appreciation. Do keep visiting.