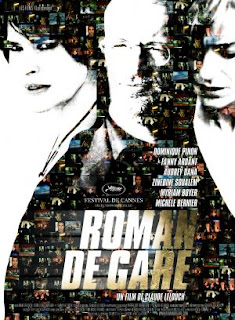 Brought to Calcutta for the discerning film goers thanks to the philanthropic endeavour of NDTV Lumierre, Crossed Tracks is the kind of thriller that will engage the viewers without providing any staple for edge-of-your-seat popcorn-and-cola entertainment. The story is simple and without a plethora of red herrings or startling plot twists; rather it is contented with employing a few small deviously deceptive moments of human misjudgments, maladroitness, ingenuity and errata. The tale (shot in a simplistic and almost minimalist fashion), bereft of explosive developments, has a strange ability to allure and involve the viewer’s faculty. The well-enacted protagonist, an unattractive, diminutive and mysterious man could be any of the following – a struggling small-time writer, a dangerous escaped convict who lures children into his traps by showing magic tricks, a man who has run away from his family, or a ghost writer for a famous, best-selling novelist. The movie comprises in its sub-plots a developing love-story, a murderous angle, and conning of identity. The movie, though never enthralling, delights on account of its subtle concoction of humour and suspense.