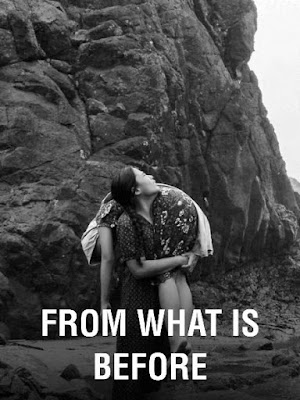 Lav Diaz powerfully centered From What Is Before – his brooding, majestic 5 ½ hour tour de force – around the rise and establishment of Marcos’ US-backed right-wing, repressive military dictatorship in 1972, in the name of “saving the republic” by weeding out “anti-national and communist elements”. Its richly atmospheric portrayal of the upending of a grimy rural community’s dynamics through infiltration of outside forces, reminds one of the Tarr magnum opus Sátántangó; its compelling but circuitous depiction of a place being engulfed by fascist forces, was reminiscent of Haneke’s masterful The White Ribbon; and, towards the end, it strikingly showed the vicious paramilitary units who appeared like mirror images of their Indonesian counterparts in the brilliant and harrowing diptych The Act of Killing and The Look of Silence. Diaz set this disconsolate microcosmic tale in a remote, barren, impoverished, rain-washed coastal village, where indigenous faith comingle with Christianity, and the residents exist in fragile eco-balance – a kind-hearted Father (Joel Saracho); a mentally ill girl (Karenina Haniel) both cared for and exploited by her elder sister (Hazel Orencio); a resolute farmer (Perry Dizon); a lecherous winemaker; etc. The balance initially gets shaken with a few eerie occurences – hacking of a rich landowner’s cows, burning down of houses –; then gets severely disturbed – through the dubious motives of a nosy peddler, a double suicide –; and finally gets irrevocably shattered with the arrival of the army and their henchmen, placing the village under curfew leading to Marcos’ proclamation of nation-wide martial law. The delicately moody visuals of the harsh landscapes captured through stunning B/W photography, along with the progressive tonal variances and deliberate pacing, magnificently foreshadowed the impending sociopolitical doom and devastation.