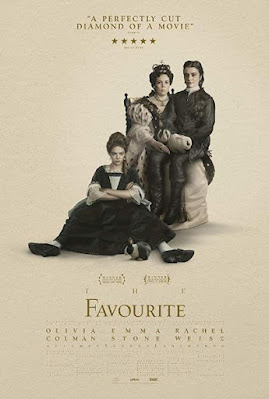 Who could’ve guessed that Lanthimos – one of the spearheads of the Greek Weird Wave – would make a period costume drama, and one as stunningly mounted, resplendently designed, gorgeously composed and ravishingly filmed, as The Favourite! But then, this was so much more. Mordantly funny, decadently ribald, viciously satirical, gloriously outlandish and defiantly anarchic, this baroque work used early 18th century British monarchy as both springboard and point of departure. The state of affairs of the kingdom is captured as both chaotic and carnivalesque, what with an incessant war being waged with France, the Treasury running low, and constant infighting between the outrageously puffed up ministers in the royal court and chamber. However, the broader internal and external historical references aside, this was ultimately a fierce chamber piece centered around the machinations of three extraordinarily enacted women – Queen Anne (Olivia Colman), who’s gout-ridden, perennially sulking, emotionally fragile and subject to wild mood swings, and loves being cloistered indoors with her 17 rabbits; Lady Sarah (Rachel Weisz), the ferocious and formidable Duchess of Marlborough, who happens to be the Queen’s closest confidante with their relationship going way beyond the official and the prudish, a master of realpolitik, and the de facto controller of the state’s affairs; and Abigail (Emma Stone), Sarah’s wily and ambitious cousin who’d fallen on hard times and a natural-born seductress, who becomes a ferocious competitor for the Queen’s affections. Class, power, genders and sexual politics, therefore, were some of the key themes here. The film’s visual splendour, dizzying technical bombast – filled with ultra wide-angles, fish eyes, whip pans, dollies – and rapturous use Western Classical music, including some anachronistic ones, made the subversive farce all the more rollicking.