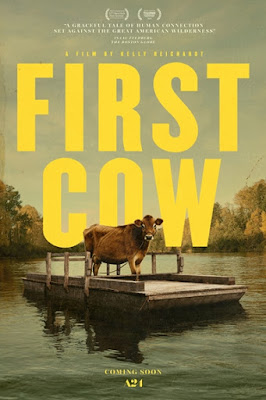 Two interrelated conversations marvelously defined the politics and understated brilliance of Kelly Reichardt’s eloquent deconstruction of the romanticization surrounding free enterprise and American Dream in First Cow. King-Lu (Orion Lee), a Chinese immigrant on the run, informs Cookie (John Magaro), a penurious cook just released from a group of travelling fur trappers – the two drifters who’ve serendipitously met in 1820s Oregon Territory and are exploring ways to a better future – that entrepreneurship relies on either capital or miracle or crime… and that the choice is rather clear as the former two are impossible to come by if you’re poor. And thus they start baking and selling delicious cookies that the locals get hooked onto, leading to a fast growing booty for them; just that, unbeknownst to all, they rely on an illegally procured ingredient, viz. the milk of the first ever cow brought to that region by the wealthy Chief Factor (Toby Jones) of the British Colony. In another key sequence – one of the rare expositional moments not filmed from the two men’s POV – the seemingly benevolent Englishman, who too has fallen in love with the cookies, reveals his menacing side – and in turn the noxious underbelly of class privilege, colonialism and slave capitalism – when he confides to a fellow Brit that it’s prudent to execute a worker who cheats, because the enhanced productivity that this elicits in the workforce amply compensates for the loss in capital. The gently languorous pacing, wryly satirical tone and sharp performances made this such a delectable watch, even if the prior knowledge of the protagonists’ conjoined fates – established through a prologue set in present day – imbued doomed inevitability and tenseness in the proceedings.