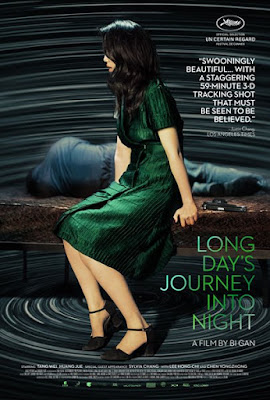 New Age Chinese filmmaker and poet Bi Gan’s Long Day’s Journey into Night is a work as much drenched in bold expressionistic flavours and fatalist atmosphere, as it’s awash in moody poeticism. Consequently, with its meandering structure, obtuse narrative, wry monologues, dream-like palette and oblique cinematic references, it’s closer to a hypnotic tone poem – the kind that one “experiences” rather than “comprehends”. And, irrespective of whether one finds the director’s formal experimentation as avant-garde and brilliant or self-conscious arthouse showboasting – or a mix of both – there’s no doubting its visual splendour and technical virtuosity. The languorously paced storyline is about Lou (Huang Jue), a weary man with a shady past, who’s returned to his grungy hometown of Kaili after many years on the occasion of his father’s death, in order to search for Wan (Tang Wei), an enigmatic and irresistible femme fatale from his past who continues to hold deep sway on his mind. Thus he begins a journey that’s as much in the specific milieu of Kaili as it’s into his memories, fantasies and subconscious, thus making this romantic neo-noir a strangely intriguing watch. In the melancholic first half –ravishingly composed and hauntingly scored – he reminisces about an old friend who was murdered, visits his last surviving family ties to a small restaurant that his father used to run, and encounters people from Wan’s elusive past and present as he’s increasingly enmeshed in memories of her. And, in the inexplicable 2nd half, it suddenly shifted gears by embarking on a bravura, astonishing one-hour long single take sequence, and the jaw-dropping audacity of this tracking shot (filmed in 3D) might well be the film’s raison d'être itself.