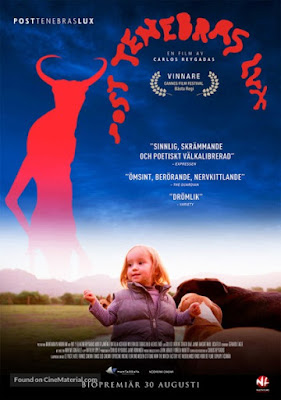 Mexican filmmaker Carlos Reyegadas is a darling of the arthouse and festival circuits, but largely underwatched otherwise beyond aficionados who swear by him – and his Post Tenebras Lux provides for a pertinent elucidation of this dichotomy. A fascinating but intriguing mix of ravishing visuals and compelling ingenuity on one hand, and deliberately opaque and even weird narrative elements and developments on the other, including moments of funny but puzzling surrealistic choices, this is therefore a film that’s bound to both enthrall and exasperate. It begins with an ethereal overture where a little girl (played by the director’s own daughter) is shown in a state of tranquil marvel at the meadows surrounded by cows, horses and dogs. She, as it turns out, is the youngest kid (her elder sibling is played by Reyegadas’ son) of an upscale couple with conjugal issues – the abrasive Juan (Adolfo Jimenez Castro) and his stunning but submissive wife Natalia (Nathalia Acevedo) – residing at pricey cabin in the woods. There, at an AA meeting at a rundown shack where he reveals his addiction to pornography, he gets acquainted with an impoverished local worker (Willebaldo Torres) with a self-destructed past, and which in turn paves way for violent fates for both, including the most spectacularly ferocious suicide imaginable. Class conflict and marital differences were therefore the two dominant themes, and a number of cinematic nods were discernible too. Influences of Tarkovsky and Malick were palpable, as were potential references to Kubrick’s Eyes Wide Shut in terms of a gleeful orgy, and perhaps also to Lynchian outré, be it in the form of a mysteriously glowing Satan or inexplicable plot interjections or the above-mentioned self-inflicted coup de grâce.