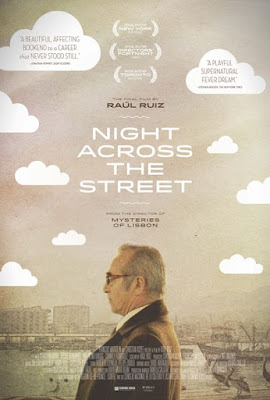 Awash in nostalgia and filled with splashes of surrealism, Raúl Ruiz’s charming, playful and idiosyncratic swansong Night across the Street – he returned to Santiago from exile to make his final film – was  the Chilean giant’s gently expressionistic ode to cinema and filmaking. Having just undergone a liver transplant, he was perhaps well aware of his impending mortality while he made this – which released posthumously – and hence it was also a disarmingly affecting meditation on death, along with quirky reflections on time, ageing, and the complex web of memories and dreams. Past and present, real and fantasy, life and post-life, etc., therefore, freely coalesced in this oftentimes inexplicable and yet strangely hypnotic work. Don Celso (Sergio Hernández), the film’s ageing, dreamy, soft-spoken, gentle-natured, absent-minded protagonist, is clearly the director’s alter-ego; he lives alone in a boarding house surrounded by curios and artefacts he loves making, and is on the verge of retiring. While he spends his final days at work, he often travels back in time to his days as a young, precocious boy (Santiago Figueroa) who calls himself Rhododendron, takes lessons on life from the fictional pirate Long John Silver, and befuddles Beethoven on the technological advances of the modern world, perhaps as a way to escape from his fascist father (in perhaps the narrative’s sole openly political stance); meanwhile present-day Celso has rambling conversations with the French writer Jean Giono, anticipates his murder by an assassin, finds himself surrounded by ghosts from his past, and even imagines himself becoming one. Filled with irreverent asides, dense with allusions and gorgeously choreographed, this is a work that pulls one in despite its incoherence and structural complexity.