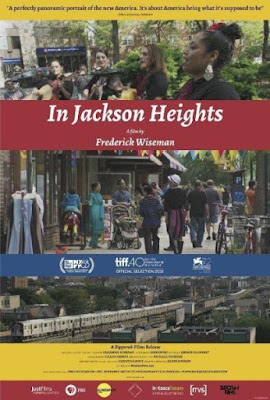 Some of the most exciting urban neighbourhoods tend to be those which are multicultural melting pots – the likes of Lavapiés in Madrid or the Latin Quarter and Montmarte in Paris or Kreuzberg in Berlin; and going by that understanding, nothing would probably beat Jackson Heights – part of the borough of Queens in New York City – which is among the most ethnically, linguistically and therefore culturally diverse neighbourhoods in the world, with 167 languages presumably spoken by immigrants from all across the world. Frederick Wiseman’s masterful, sprawling, remarkably perceptive and politically rich documentary In Jackson Heights – a work that’s both monumental and personal – magnificently captured the nuances, complexities, hues, vibrancy and daily struggles of this locale; the idea of capturing a snapshot of a very specific locale through its residents and old-timers reminded me a bit of Varda’s Daguerréotypes, though the latter was a far more intimate portraiture. Wiseman opted for a loosely structured but organically stitched narrative that, through a mix of conversations, speeches, confessions and vignettes, crafted a kaleidoscopic tapestry on a range of complex themes – relentless gentrification, assimilation of religious and racial diversity, homophobia, xenophobia and bigotry, social welfare, police brutality, old age, etc. – that define the lives of this tightly-knit blue-collared locality comprising of Hispanics, Asians, Caucasians, African Americans, Muslims, Jews, etc. We therefore witness the iconic Queens Pride march, nefarious usurping of small shops by property sharks, tragic and painful plights of immigrants, discrimination against trans women, football World Cup celebrations, local fish markets in ‘Little Bangladesh’, religious congregations and so much more, along with engrossing snippets of the shops, streets, parlours, mosques, synagogues, subways, community centers, gay clubs, retirement homes, driving schools and whatnot.