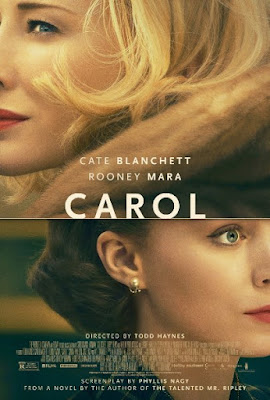 The different personas defining the same individual – how the society perceives you, how others expect you to behave, what you essentially are and want to be, what you end up being while striking a compromise – and hence, in turn, the diverse roles one is compelled to enact within a conservative societal construct, were the key tenets in Todd Haynes’ tender, intimate and aesthetically gorgeous film Carol. During the Christmas season of 1948, Patricia Highsmith – then a temp employee at a Bloomingdale store in NYC – was approached by a blonde woman in mink coat to order a doll from her; using this as the springboard  she wrote 4 years later The Price of Salt, albeit under a pseudonym in order not be tagged as “a lesbian-book writer”. That fleeting contact formed the starting point in the movie too, for its achingly portrayed love story between Carol (Cate Blanchett), a well-off housewife whose marriage is on the tatters on account of past homosexual indiscretions, and the much younger Therese (Rooney Mara), an amateur photographer working as a department store clerk, in 1950s USA. When her husband (Kyle Chandler) literally dupes her off their daughter by slapping her with a “morality clause”, Carol, almost on an impulse, embarks on an aimless cross-country road trip with Therese – they’d only briefly connected prior to that – over the course of which they fall in love, in defiance of the men in their lives and their stifling conformist expectations. The film’s richly melodramatic tone – accentuated by the splendid visual palette dominated by warm colours and misty windows – affectingly portrayed the timelessness of the human drama, while also underscoring the tale’s compelling queer stance and contextual specificity.