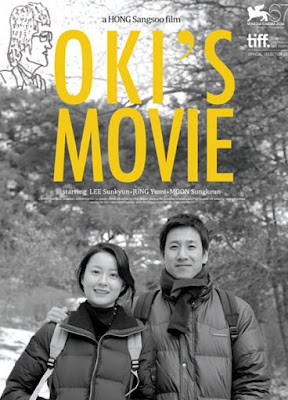 Portraying relationships and experiences from different perspectives, either through POV or temporal shifts, and casually blurring the lines between the film itself and one(s) within it, have been two distinctive formal preoccupations – mix of playful tricks and life-long obsessions – that have been running through Hong Sang-soo’s prolific filmography; and both were the defining aspects for Oki’s Movie too – his deadpan, unassuming, episodic, at times funny, oftentimes ambiguous and always meandering work. The self-reflexive narrative zigzagged across multiple perspectives, timeframes, meta-reality and reliability through its four interconnected chapters. In the first chapter, set in present day Seoul, Jingu (Lee Seon-kyun), a struggling filmmaker and part-time lecturer at a university’s film studies department, has a rather nasty altercation with his head of the department, Professor Song (Moon Sung-geun), upon one drink too many, and later faces a disastrous Q&A post his film’s screening. In the second chapter, set a few years earlier, we see Jingu – a student then – falling hard for fellow film school student Oki (Jung Yu-mi) while she’s still getting over her affair with an unnamed older man. In the third chapter, set on a particularly wintry morning, Jingu and Song are the only students who’ve turned up for Song’s class, and they end up discussing on the absurdity of relationships, with just the hints of unsaid chemistry in the air. And, in the excellent final act, seemingly based on a short film made by Oki, she shares her experiences of hiking up the same path on two different New Year’s Days, albeit once with Song with whom her affair is on its last leg, and later with Jingu with whom she’s just embarked on a new relationship.