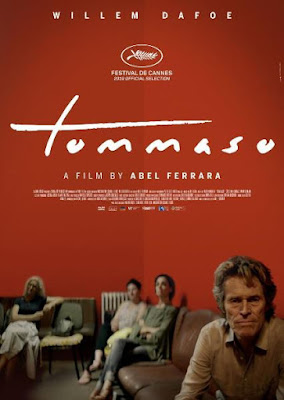 Tommaso – Abel Ferrarra’s grungy, psychedelic portrait of an expat artist as a tortured middle-aged family man, forever on the run from his sins and guilts – is ferociously and unabashedly autobiographical; in fact, so much so that that it voyeuristically draws one in, while also pushing one out with its rage, self-loath, fragile toxic male ego, sexual paranoia and painful self-confessions. Like Ferrara, the eponymous Tommaso (Willem Defoe) is an American filmmaker – and a recovering addict – who’s shifted his base to Rome, and is living a seemingly balanced life with his much younger wife Nikki (played by the filmmaker’s wife Cristina Chiriac) and their little daughter (again, unsurprisingly, played by Ferrara and Chiriac’s daughter Anna). He’s in the process of finalizing the storyboards for his next movie (a nod to Siberia that Ferrara was working on); he’s learning Italian from a private tutor; he loves his daily cup of coffee at a cosy café downstairs; he conducts classes on dramatics for youngsters; and he regularly attends AA meetings where he bares to others his demons and earlier self-destructive streak. Small chinks, however, start appearing due to brewing jealousy surrounding his wife’s fidelity – borne out of his deepset sexual insecurities, repressed desires, and Catholic guilt – and they soon turn into full-blown paranoia and delusions, thus violently upsetting the tenuous sense of balance. Defoe was terrific as Ferrara’s alter-ego, with his gashing transition from an amiable man to a manic with a lighted fuse. Chiriac too gave a fiercely courageous turn, while portraying herself from her husband’s torturous, fetishistic perspective. The moody photography, along with a few (admittedly) clunky symbolisms, added to the slow-burn depiction of Tommaso’s psychological and marital collapse.