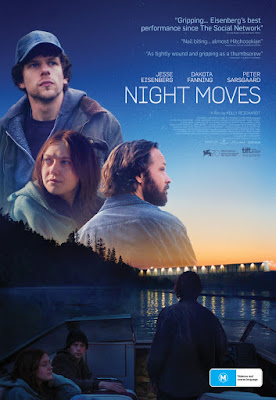 Night Moves remains such an atypical entry in Kelly Reichardt’s marvelous canon! What immediately set it apart is the fact that it’s a thriller centered around eco-terrorism, with its narrative structured like a straight-up genre movie with pre- and post-crime segments, and that made it so dramatically different vis-à-vis what she’s made before or since; and, it was also overly and vocally political, unlike her preferred mode of understated explorations on gender, class and race. But these facets, ironically, made this quite radical too! The moody pacing, bleak ambience, existential fatalism, allegiance with and empathy for outsiders, deep and progressive sociopolitical consciousness, and not to mention, Oregon setting – her unmistakable signatures, however, were there alright. Josh (Jesse Eisenberg), who works at an organic farm, Dena (Dakota Fanning), his sole close friend, and Harmon (Peter Sarsgaard), an ex-Marine who they’ve somehow become acquainted with, are radical environmentalists who’ve decided to blow up – using home-made bomb – a hydroelectric dam they believe are severely harming the environment, in order to make a political statement, even if that might not make more than just a ripple in the ocean. Their meticulous planning, the tension, the anger at the hyperconsumerist capitalist world around them that compelled them to undertake something as audacious and desperate as this, and even the act itself, however, might seem like the easier part when it comes to living with guilt and in perpetual secrecy upon realizing that something has gone terribly wrong that they weren’t prepared for. Eisenberg and Fanning’s brilliant turns, the moral ambiguity and the bleak nihilism made this a lot more than any run-of-the-mill thriller, despite a few pitfalls that one might associate the film with.