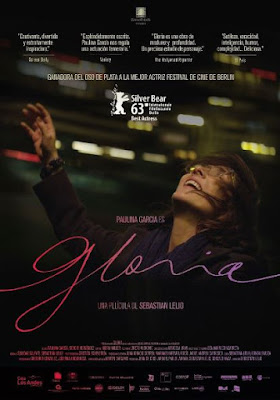 The 2010s has been a fascinating decade in terms of films fiercely centered on middle-aged women – defiant in their dreams and desires, boldly confronting insecurities and despair, challenging social expectations – and vividly portrayed in their complexities through stunning performances. In that striking list – comprising of Things to Come, Elena, Julieta, Clouds of Sils Maria, Poetry, Elle, 45 Years, Mia Madre, Aquarius, La Vérité, Let the Sunshine In, etc. – Sebastián Lelio’s vibrant, bittersweet, exuberant, melancholic and beautifully realized gem Gloria finds a well-deserved place. Its protagonist Gloria (Paulina García) is 58-year old single, independent Santiago woman divorced over 10 years back and with grown-up children having lives of their own. She’s dazzling, carefree and still attractive, loves to swing to her favourite tracks, and lives life alone but on her own terms; however, she’s also quietly lonely, and hence, desirous of company, she frequents lonely hearts clubs and discos in search of relationships. Her days of aloneness seemingly end when she befriends Rodolfo (Sergio Hernández), an older, recently divorced, well-to-do retired naval officer (possibly from the Pinochet days). He, however, is overly close to her grown-up daughters who’re emotionally and financially dependent on him, and that keeps creating nagging frictions – he avoids introducing her to his family, keeps answering their incessant calls and even leaves midway during an intimate get-together with Gloria’s family – until it just goes too far, leading to a stunning retribution by her. García gave a marvelously endearing turn, while Lelio’s terrific use of music – as in A Fantastic Woman – was eclectic and counterpointed both the blues and joie de vivre, leading to a heartwarming finale memorably set against the Italian song, you guessed it, ‘Gloria’.