Uncle Boonmee Who Can Recall His Past Lives [2010] 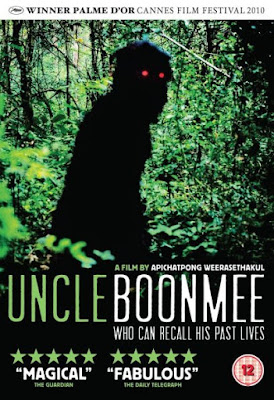 Thai auteur Apichatpong Weerasthakul’s eccentric and strangely enchanting darling of the arthouse circuit, Uncle Boonmee Who Can Recall His Past Lives, is a beguiling mix of avant garde video essay, narrative experimentation, magic realism, ghost story, meditation on memory and mortality, and sharp political commentary. The movie, therefore, was alternately poetic, melancholic, baffling and even weird. Boonmee (Thanapat Saisaymar) is an ageing farm owner suffering from severe kidney ailment, and is spending his final days in the company of his caring sister-in-law Jen (Jenjira Pongpas) and doting nephew Tong at his jungle enclave. Their tranquil, uneventful lives face an interesting jolt – though the otherworldly development is presented in the most undramatic way possible – when, one evening, he’s visited by the phantasm of his long dead wife, and his missing son who’s taken the furry form of a mythical “monkey ghost”. Both spatial and temporal flows were set aside as a series of oblique episodes are portrayed in dream-like manner – a princess sensitive about her physical appearance indulging in bizarre erotica, a mysterious journey by Boonmee and those around him to a cave deep within the jungle, and Tong’s embracing of Buddhist monkhood upon his uncle’s demise that ends with his and Jen’s splitting of their physical selves. These languidly paced surreal happenings – which were intriguing, ambiguous and at times infuriating too – made for an infusion of the supernatural into the mundane. Two deceptively sharp political moments, interestingly, stood out – a poor illegal immigrant from Laos who’s suspected by Jen as an untrustworthy alien best avoided, and Boonmee’s pensive recollection of his participation in the brutal massacre of Communist sympathizers by the Thai military forces during the 60s and 70s.