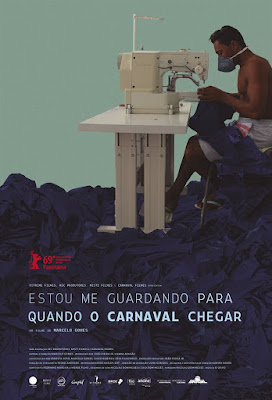 Toritama, located in northeast Brazil, was once – to borrow the title of an irresistible Bohumil Hrabal novel – a laid-back “little town where time stood still” and literally nothing happened; but then the allure of gig economy arrived under the the charming garb of “blue diamond”, promising wealth, success and realization of capitalist dreams, thus irrevocably altering its landscape forever. Marcelo Gomes, in this deceptively engaging documentary, focused on the dramatic transition of this town popularly called the “jeans capital” for producing 20 million denim pairs annually. A random day here, therefore, is a bustling display of people involved in stitching, sewing, cutting, ironing and whatnot out of make-shift spaces run by hardworking locals, and transporting them using motorcycles. They’re all suffused with entrepreneurial pride on account of their supposed independence, belief that this is bringing them more money than ever before, and conviction that they’re earning future glory through their present slogging. Yet, ironically, they labour for peanuts in congested shop floors and garages, from early morning till night seven days of the week, without any security or benefits; and, if these weren’t enough, they must literally sell off their possessions every year – anything from TV and fridge to furniture – in order to pay for their annual vacations to the nearest beach during the Carnival. Gomes, interestingly, portrayed these dichotomies – comparisons with memories of this town which he’d visited long back as a kid, and the illusory nature of lives of the lively but impoverished populace – with disarming candour but also using soft brushstrokes; hence neither was the satire acrid nor the nostalgia sentimental, and instead it was filled with captivating freshness, amused curiosity and empathy.