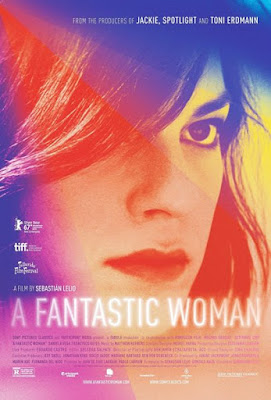 In A Fantastic Woman Sebastián Lelio chronicled a tale of grief, loss and mourning, through the lens of a marginalized transgender woman. The parallel portrayals within the same frame – viz. universality of the former and particularity of the latter, by having the emotionally affecting human drama meet midway the furious sociopolitical commentaries – was perhaps the film’s most joyous quality. And, the audacious decision to actually cast a trans woman (Daniela Vega) in the protagonist’s role – reminding one a bit of the bold and brilliant casting of gender fluid Bengali filmmaker Rituparno Ghosh in Arekti Premer Galpo and Chitrangada – made it all the more stirring; that she gave a spellbinding performance too was the icing. Marina (Vega), who’s yet to biologically transition, and works as a night club singer and a restaurant waiter, is in a passionate affair with Orlando (Francisco Reyes), a much older and well-to-do cis man whose sexual defiance has estranged his family. Their cocooned little world in an otherwise conservative milieu that severely frowns upon their relationship, however, comes crashing when he abruptly dies of aneurysm. The condescension, disparagement, hostility, harassment and violence that Marina faces – from Orlando’s embittered ex-wife (Aline Küppenheim), his vicious son (Nicolás Saavedra) and a cop from the sex crimes division (Amparo Noguera) – takes her to the precipice by dismissing her sense of loss and disallowing her right to grief. The film’s excellent soundtrack – a peppy crooning by Vega of Héctor Lavoe’s “Your love is like yesterday’s newspaper” and Aretha Franklin’s A Natural Woman were the highlights – coupled with a haunting score and fine depictions of both the elegant and grimier sides of Santiago, made it all the more elegiac and visceral.