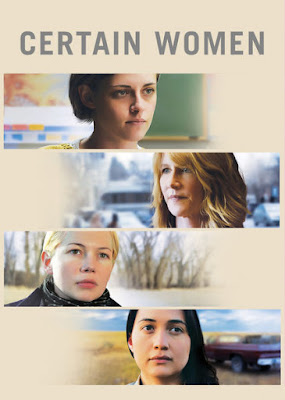 With Certain Women Kelly Reichardt achieved something remarkable in how splendidly she touched upon a range of prescient themes – patriarchy, agency, marital fidelity, marginalization, unrequited love, burdens of capitalism, etc. – through a work that was so incredibly disarming, low-key and grounded. Hence, the weightier topics aside, it was also a gently affecting portrayal of the trivial aspirations, ephemeral joys, quiet disappointments, and the underlying existential ennui of four women in rural America. Reichardt structured the film as a loosely hyperlinked triptych by adapting three separate short stories by Maile Meloy set in sparsely populated, bitterly cold Montana. The first segment is centered on Laura (Laura Dern), an attorney embroiled in a rather cold affair and saddled with a disgruntled client (Jared Harris) who’s adamant about suing his former employer despite no legal standing. In the second segment, Gina (Michelle Williams), a businesswoman and a social outsider married to an adulterous man who’s also her subordinate in her business, hopes to procure some authentic sandstone from an old-timer. And, in the final and arguably the best segment, a soft-spoken Native American woman (Lily Gladstone), who manages a horse ranch alone, gets emotionally drawn to an attractive young lawyer (Kirsten Stewart) who must drive for hours to take legal classes for high school teachers in order pay off her student loans. The lazy beauty, stirring melancholy and wrenching loneliness in the three vignettes – the tone for which was established in the first scene itself wherein a slow train diagonally cuts across the screen in a stunning, uninhabited landscape – were exquisitely evoked through marvelous photography, and brought to life by brilliant performances, with Gladstone’s being the most unforgettable of the lot.