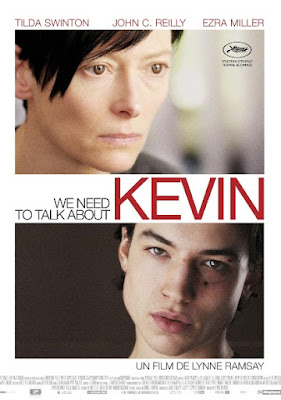 Lynne Ramsay had made a crackling debut with the marvelous coming-of-age film Ratcatcher, and she’d followed that up with the curiously affecting buddy and road film Morvern Caller. With We Need to Talk about Kevin – her first film in 9 years, adapted from the the novel of the same name by Lionel Shriver – she made quite a shift in terms of narrative, thematic and stylisation choices. The result, methinks, was a mixed work – compelling on account of a stunning lead performance by Tilda Swinton, the bold expressionistic splashes that the film had begun with, and sustaining the oppressive atmosphere; however, the portrayal of evil sans any examination of the complexities surrounding it – perhaps projecting “nature” over “nurture” in that clichéd debate – was problematic and held the film back from achieving psychological depth; also, the visceral sense of disorientation in the initial stages were tad undone by the more conventional (and expositional) storytelling in the later stages. However, a subject as discomfiting and troubling as this does certainly speak volumes of Ramsay’s willingness to venture beyond her comfort zones. The movie is hinged around a complicated and intensely antagonistic mother-son relationship – between Eva (Swinton), a bohemian and successful travel writer who ends up settling down into a staid suburban life upon her marriage (John C. Reilly plays her loving husband) and unplanned motherhood; and her revolting son Kevin (brought forth through chilling but essentially one-note turns by Jasper Newell as a kid and Ezra Miller as a teenager) who becomes increasingly sly, cruel, destructive and sociopathic as he grows – that begins on a sour note and keeps going south thereafter, until it ends in violent mayhem.