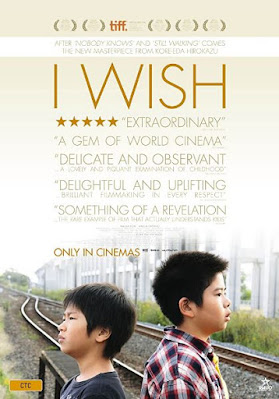 Kore-eda’s I Wish can possibly be deconstructed along multiple lines – as a commentary on marital breakdown and its effects on children, observation on the pop-cultural significance of bullet trains in Japan, and even as an evocation on living adjacent to an active volcano. However, what this essentially remains above all is an unassuming and heartwarming children’s movie, and a rare kind in that all its weightier facets were subsumed by the simple joys, bleary-eyed hopes, fantastical dreams, quiet sorrows and surprisingly profound realizations of kids. At the centre of this gently amusing film were two real-life brothers who Kore-eda cast as siblings split along both familial and geographical fronts on account of their parents’ acrimonious separation – the stoical 10-year old Koichi (Koki Maeda) who stays with his mother and loving maternal grandparents in the southern city of Kagoshima, and the goofy 8-year old Ryu Ohshirô Maeda) who lives with his easy-going dad who alternates between a rock band and the job of a labourer. Though the parents aren’t on talking terms, the brothers speak to each other regularly, i.e. when they’re not in school or hanging out with their close set of buddies. Interestingly, while Koichi, despite his seemingly stolid demeanour, craves to have the family back together, Ryu is secretly contented with the current status quo. However, upon being told that wishes made while witnessing two crossing bullet trains come true, the two, along with their gang of equally cute pals, secretly plan a memorably adventurous trip. The lovely, spontaneous turns by the young actors was undoubtedly the most enduring aspect of the film while the adult actors, comprising of Kore-eda regulars, were happy to play supporting roles.